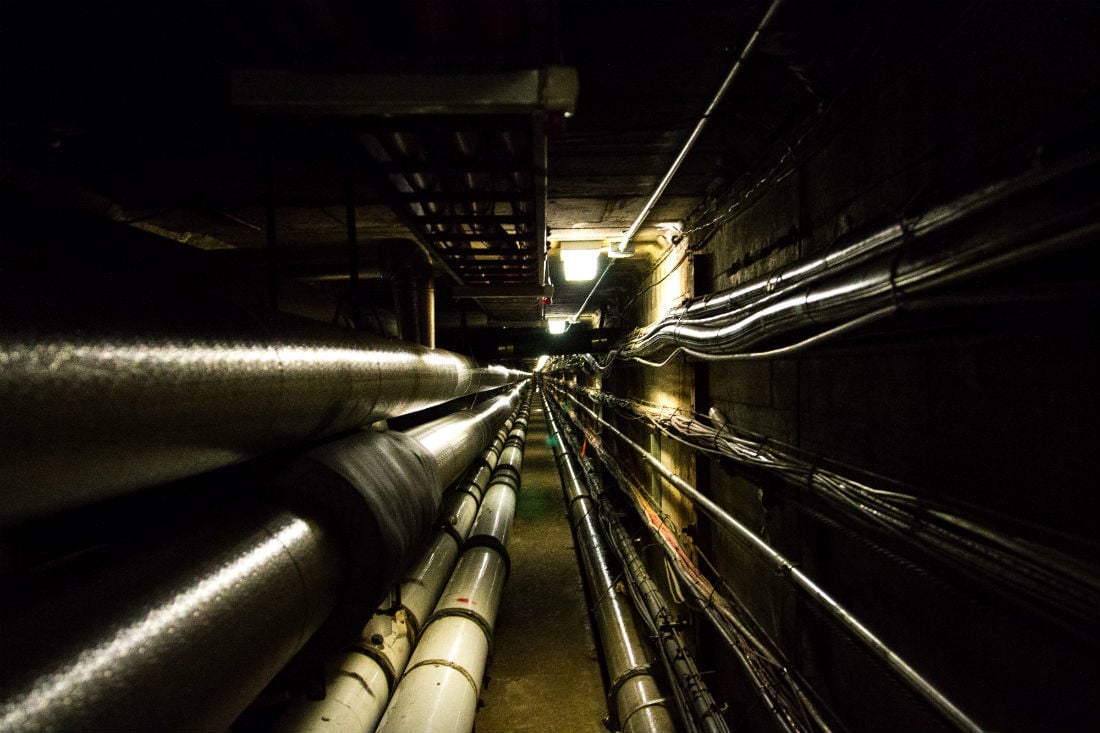 There are four miles of utility tunnels beneath UO’s campus. Ben Green/Daily Emerald 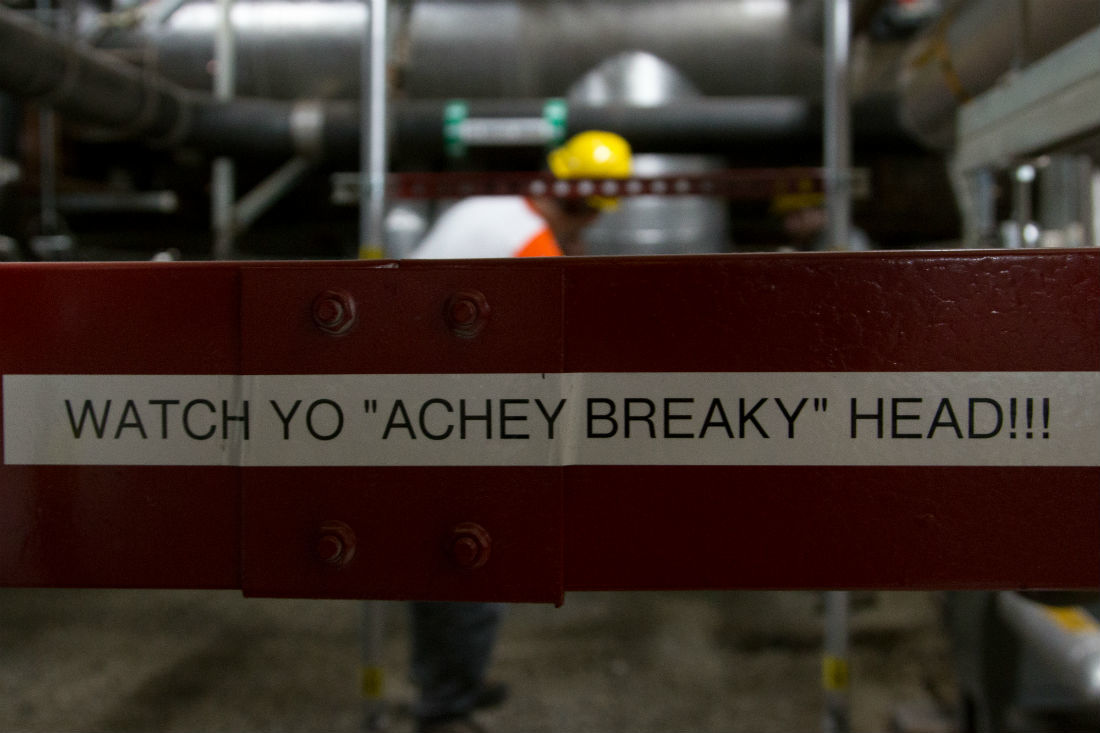 There are four miles of utility tunnels beneath UO’s campus. Ben Green/Daily Emerald

A student heads to the water fountain during a break in class. A professor, preparing a lecture, turns on the lights in the classroom with the flick of a switch. After a day in the laboratory, a research assistant washes their hands with hot water.

The University of Oregon community relies on these basic utilities and the people who keep them running. Unbeknownst to most, a labyrinth of underground tunnels shuttle steam, chilled water, electricity and compressed air from the Central Power Station to the entire campus. But besides providing these necessary utilities, the tunnels are also a source of campus mystery.

Inside the tunnels, criss-crossing pipes and cables make navigating the corridors an adventure. Tunnel workers are required to climb over yards of pipe and are exposed to intense heat. This underground network reaches nearly every building on campus

Hardhats, flashlights and radios are mandatory for work in the tunnels, as some stretches are dimly lit and have minimal height clearance. Signs posted on the tunnel corridors designating the entrance to various campus buildings make navigation easy. But being locked inside is an unnerving proposition.

“We walk the tunnels once a week for visual inspection to make sure every bit of it’s been looked at,” Hardenbrook said. “But otherwise you could be in there for days and nobody would know.”

The consequences of a burst pipe would be dire for a worker in close proximity, Hardenbrook explained. Rapid flooding, burns, and asphyxiation are all risks workers of the tunnels assume when they enter.

“These are hazards people above ground don’t need to worry about, but we deal with them every day,” Hardenbrook said.

Some parts of the tunnels date back to the 1940s. As campus grew, the tunnel system expanded too, and is now about four miles in total length.

“There are sections of the tunnels that are pristine,” Hardenbrook said of the more recent extensions to the network. “I’d sit down and eat in them if the rules allowed you to.”

Divided into two sections, the “west” tunnel heads south from the power station across Franklin Boulevard, then branches to various west and central campus buildings like Carson Hall, Columbia Hall and the HEDCO Education Building. The “east” tunnel services the Millrace Studios, Matthew Knight Arena and most other east university buildings. The imminent Knight Campus will also be accessed via the east tunnel.

The presence of a vast tunnel network has inspired myths and rumors among the campus community. Stories of ghosts and missing students, while unfounded, have captured the imagination of some — but not Hardenbrook.

“I’ll be honest, I’m not privy to any supernatural type of things,” Hardenbrook said. “I swim in the world of reality and practicality.”

In the past, students and other urban explorers have even snuck into the tunnels, but since Hardenbrook took his position in 2014, he has made it a point to limit access to the tunnels, including barring photography of tunnel maps.

“Probably about six months after I got here, about 40 of the tunnel doors were completely redone and new lock systems put on them,” Hardenbrook said. “There definitely was a security problem.”

The tunnel system was built as a way to save on utility maintenance costs, he explained. It provides workers immediate access to the various utility pipes and cables should something go awry. For instance, in the summer of 2016, 19 buildings on campus lost power. Hardenbrook confirmed that a rat wandered into an electrical vault underneath Johnson Hall and crawled over an exposed circuit, causing a fault in the circuitry.

“More modern equipment wouldn’t have this problem but we have a mixture of modern and older equipment,” Hardenbrook said. “Luckily we have since upgraded that particular vault.”

Although the rat perished, the direct access to the electrical vault enabled workers to restore power fairly easily, according to Hardenbrook. The tunnel network again came in handy during last winter’s ice storm. While the rest of Eugene experienced power outages, campus kept chugging.

“I live three minutes from this campus and I didn’t have power for four days,” Hardenbrook said.

The tunnels are just one aspect of the utilities and energy department, though. The Central Power Station is located on the north side of Franklin Blvd, across the street from Onyx Bridge. It produces the utilities that the tunnels distribute. And although the power station purchases electricity from the Eugene Water and Electric Board, it has the capacity to produce enough electricity to power campus by itself during an emergency said Kyle Wilson, lead cogeneration engineer at the power station.

While the tunnels are confined spaces, the boiler room inside the power station is quite the opposite. Resembling a scene from “Titanic,” the boiler room is a massive warehouse containing UHaul-size boilers, a jet engine, generators, compressed air tanks and much more.

“We have a lot more load, as we call it, or demand when school is in,” Wilson said. “We plan a lot of our operations around the school schedule so that we can take equipment down to do necessary repairs on it, so it doesn’t impact those users on campus.”

The boiler room also has a wall-sized circuit board, with breaker switches for each machine needing electricity in the room.

“They’re just like all the circuit breakers at your house but just much bigger and higher voltage,” Wilson said.

The Central Power Station employs three main groups of people: maintenance, electricians and control room workers. Maintenance workers are tasked with the general upkeep of the tunnel system and power station. Electricians make sure the energy is getting from the power station to the university without hiccups. The control room staff monitor all the equipment in the boiler room.

“Our greatest concern is safety,” Wilson said. “We all want to go home at the end of the day. We want everyone on campus to be safe.”

Hardenbrook enlisted two student workers to help bolster the safety of the plant and tunnel system. While their day-to-day work can sometimes be menial, the bulk of their responsibility is the creation of training videos for various aspects of the plant.

“I’m currently working on a lift training video,” Andres Harris, a student worker at the power station, said. “There are three different lifts around the plant, and my video explains how to operate them and what their purpose is.”

Harris, a junior and Sean Ewing, a freshman, are also putting together how-to videos about water testing machines, small spill cleanup and parking lot safety. Past student workers have created videos too, such as the tunnel safety video, which all tunnel workers are required to watch before entering.

“I didn’t even know the UO had a power plant,” Ewing said, recalling when he sent in his application for the job. “It’s not an opportunity I ever though I would have.”

While neither student has their future set on working at the power plant, they both expressed appreciation for their work environment.

“My boss told me: ‘This is how it was before. This is how it is now. Here are our plans for the future,’” Harris said. “It was really interesting to learn.”

Kyle Wilson went from working at True Value Hardware to holding the lead cogeneration engineer position in the control room. He said he remembered feeling overwhelmed by all the machinery in the boiler room. But now, he embraces the multifaceted utility system.

“That’s what I like about this job is the variety,” Wilson said. “It challenges you. I’m always learning something new just about every week.”

Correction: An earlier version of the story stated that the power station maintenance staff is tasked with general cleanliness of the plant, when in fact they are tasked with the upkeep of the tunnel system and power station.