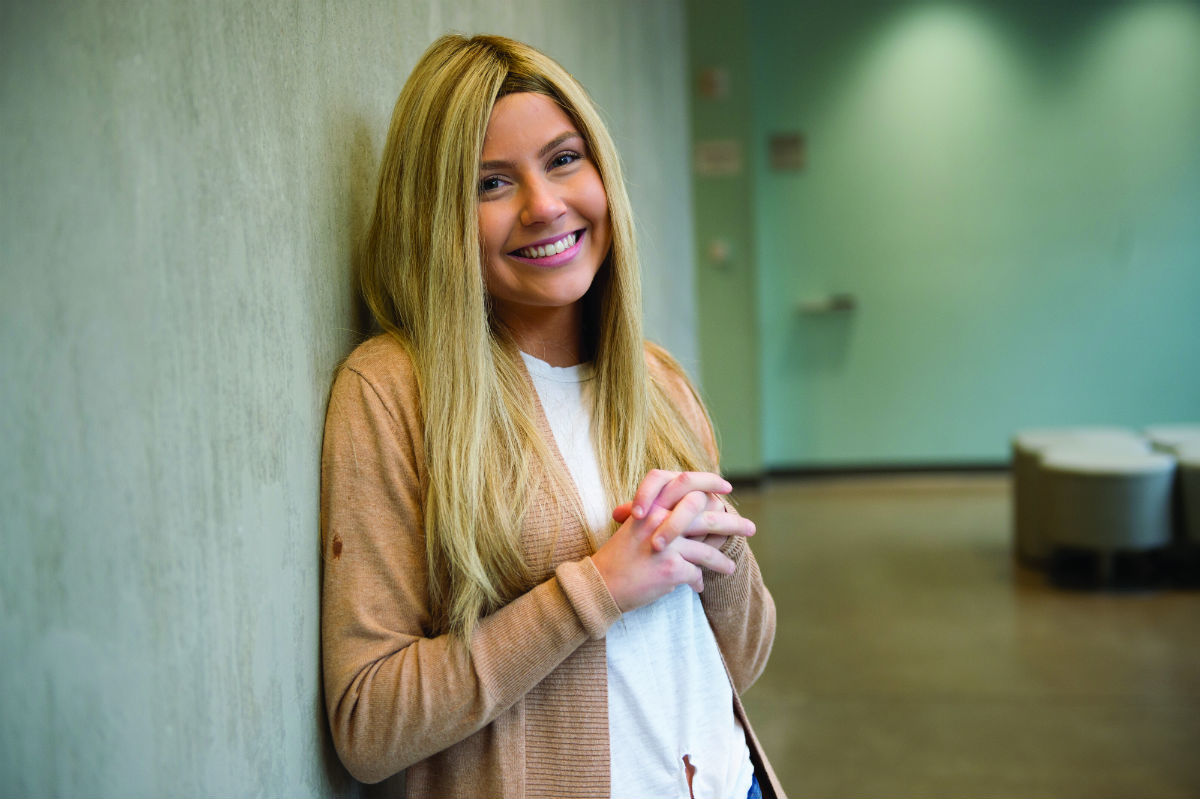 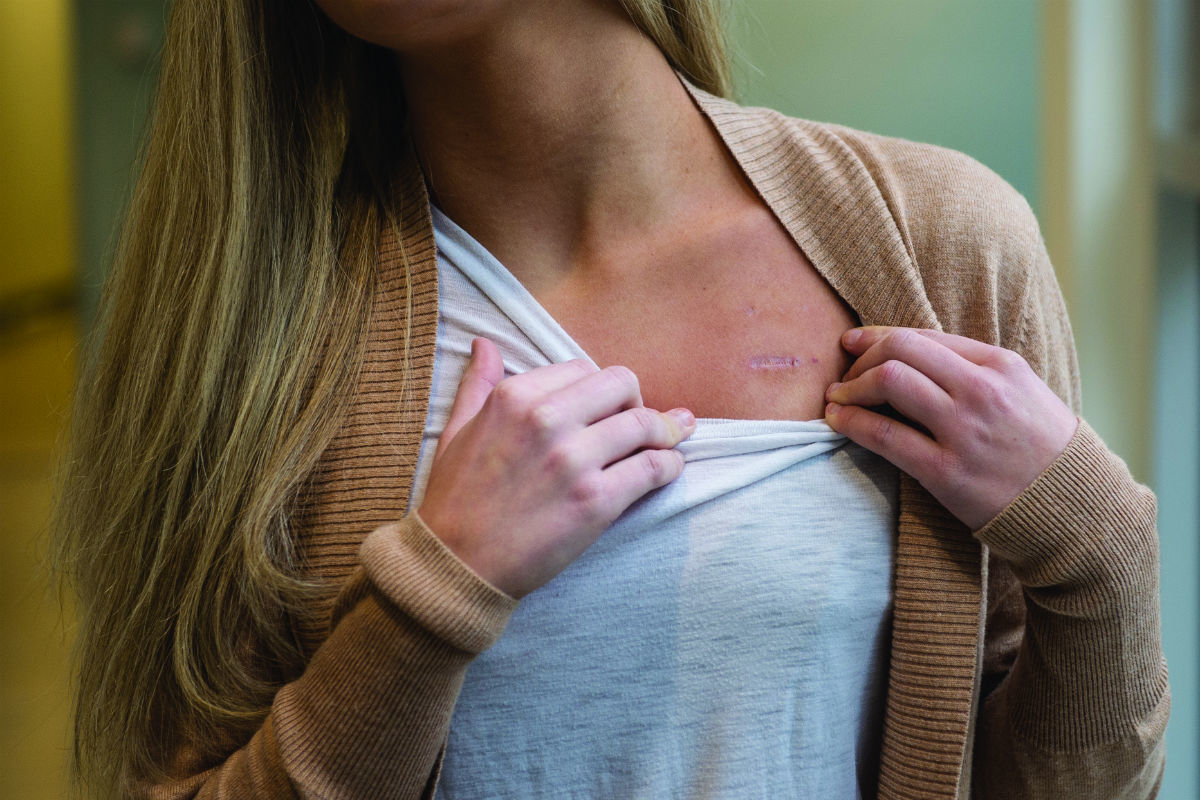 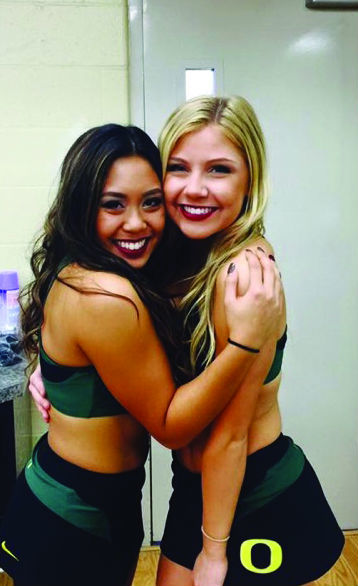 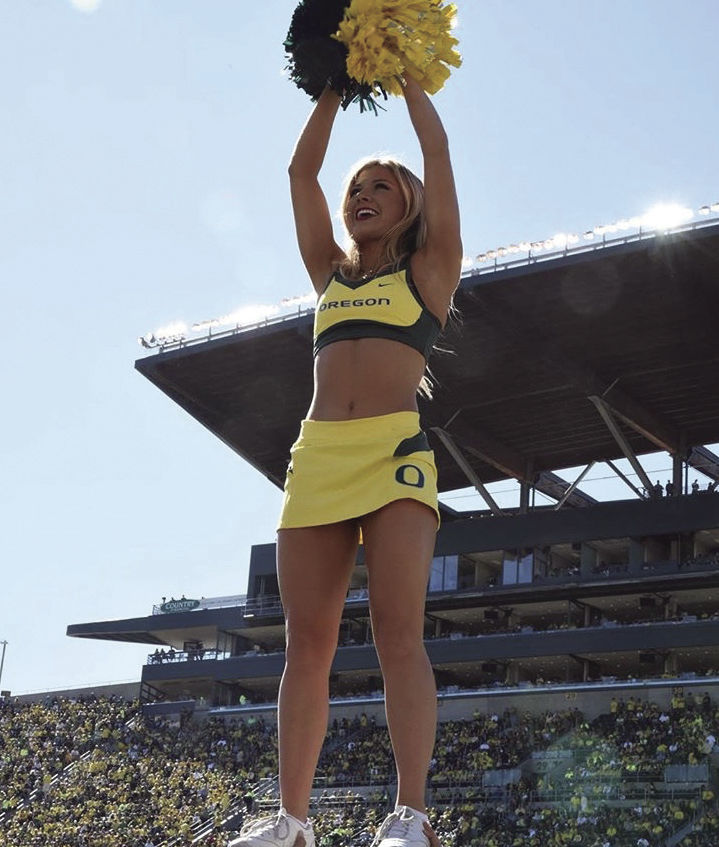 A sea of Oregon green and yellow and North Carolina blue and white engulfed the stands.

Oregon cheerleader Sarah DeBois walked out from behind the stands to look at the 77,612-person crowd.

“It was the scariest, most exciting thing,” DeBois said. “We had never cheered in front of that many people before. It was huge; way bigger than Autzen. It was probably one of the best moments of my life.”

At the 2017 NCAA Final Four, the two-year cheerleading veteran had no idea it would be her last time performing.

Two-and-a-half months after the Final Four, DeBois was diagnosed with cancer — stage 2A Hodgkin lymphoma.

While sitting out fall term and the current basketball season, DeBois, a junior, fought the disease with the support of family, friends — and with the friendship of another Oregon cheerleader who had fought her own battle against cancer at age 17.

DeBois joined the 60,000 young adults the American Cancer Society estimates are diagnosed with cancer each year in the United States. It’s the fourth leading cause of death for young adults aged 20 to 39 (behind car accidents, suicide and homicide) — the highest cause of death among women in that age range.

During finals week last June, DeBois became concerned about a large mass above her collarbone. She thought it was a reaction from the stress of studying, blaming it on often being sick with a cold.

Within the following week, the mass had grown to the size of a golf ball. Her sister told her to get checked. At her appointment in Portland, DeBois was immediately told to call her mom and see a specialist.

“It was terrifying,” DeBois said. “But I also thought, ‘It probably isn’t what I think it is. Don’t jump to conclusions quite yet.’”

But two weeks later, the DeBois family got the call. The X-rays, the blood work and CT scans had all reached a conclusion: DeBois had cancer. The disease had spread from the mass above her collarbone to her chest.

“We were in complete total shock,” said DeBois’ mother, Patty. Their family had no history of cancer. “How could someone so young and looked so healthy have cancer?”

Hodgkin lymphoma is found in the lymph nodes and upper body. The disease starts in the body’s B cells, attacking white blood cells, weakening the body’s protection against infections.

“It’s one of those cancers you always hear on commercials,” DeBois said. “It’s kind of scary because you hear about it in the side effects of medication…You never think you’re gonna get it.”

“I would say anecdotally, we probably see two to three cases a year,” Dr. Brunader said. “Maybe four where we make that diagnosis.”

DeBois planned to take summer classes, but instead she was forced to unenroll and spend her summer undergoing 10 days of radiation and four rounds chemotherapy.

“It’s the most terrible thing I have ever had to do,” DeBois said. “There wasn’t a time in my life where I felt as badly as I did. It made my jaw hurt really bad. It burned. It felt like I had a terrible migraine. I couldn’t drink water or eat. I felt nauseous all the time. I was fortunate to only have four treatments of it.  I don’t know if could have done any more.”

It was the chemo that eventually made her lose her long, blonde hair.

DeBois considered cutting her hair short for an edgier look last spring, but didn’t. After chemo took most of it, she shaved her head. Her boyfriend now jokes she finally has that edgy look.

The chemo kept her stuck indoors — a nightmare to someone who found joy in working out and being outside. Her doctors recommended she limit her activity after her white blood cell count (the body’s defense system against infections) declined.

On the off days from treatment, DeBois forced herself to do something at home in Beaverton, Oregon each day — trying hard not to exhaust Netflix.

“I knew that if I fell into the habit of not doing anything, I would stick with it,” DeBois said. “I would try to limit myself of Netflix during the day. I tried to do different things, just to keep my mind working. You go crazy being inside all the time.”

She found escape and comfort driving the country roads of Scholl’s Heights. For two hours at a time, she listened to the same playlist along the same route each day.

But it was the overflowing support that helped her through the worst days.

“It’s not something anyone should have to do alone,” DeBois said. “You have to rely on others.”

DeBois’ teammate, Rachel Padua, was one of the many supporters who sent daily check-up texts and visited her regularly.

Padua’s own experience with cancer allowed the two to form a unique bond. In her junior year of high school, Padua was diagnosed with thyroid cancer.

“I totally, truthfully can say that I understand what you are going through.” said Padua.

It was DeBois’ determination that drove her fight with cancer.

“At some point, you realize that you don’t have much of a choice,” DeBois said. “You just have to push through. That was my mentality throughout it. As morbid as it sounds, it’s like you either die or you go through some shitty stuff.”

This do-or-die mindset gave her strength during the worst of days. It spread like wildfire, taming the fears within herself and her loved ones. Through it all, it made DeBois a survivor.

“She handled the whole situation in such a positive, happy way,” Padua said. “It made it feel like there was nothing wrong. The way Sarah handled everything shows a positive mind can change the outlook of something that is seen as negative.”

DeBois’ father, Drew, also noted her resilient attitude: “Regardless of how she felt, it was one foot in front of the other with no complaining. She had her eyes on the finish line and wouldn’t look back.”

The “finish line” came on Nov. 3, her last day of treatment. The cancer may be gone for now, but her life is forever changed.

DeBois will have to go back for annual check-ups. Her body is now covered with small radiation tattoos from the location of the radiation beams and scars from the biopsy and the chemotherapy port. Both treatments may have cured her cancer, but they leave the possibility of long-term side effects, such as infertility and the risk of more cancer.

She returns to UO for winter term as she plans on taking a full 16 credits and giving her body a much-deserved rest, taking on a more behind-the-scenes role on the cheer team.

“Her smile is very contagious,” Oregon cheerleading head coach Dana Lockett said. “When you meet her, she just puts a smile on your face. Just having her back around — it means everything to our program. You definitely feel that missing void on the team because she is such a ray of sunshine.”

As for DeBois, she hopes her story helps raise awareness.

In 2018, the American Cancer Society predicts there will be 1.7 million new cancer cases in the United States.

“I think it’s important to be aware of the different types of cancer,” DeBois said. “I mean to not just say, ‘I’m healthy so it won’t happen to me’ because everyone thinks that. I used to think that.”