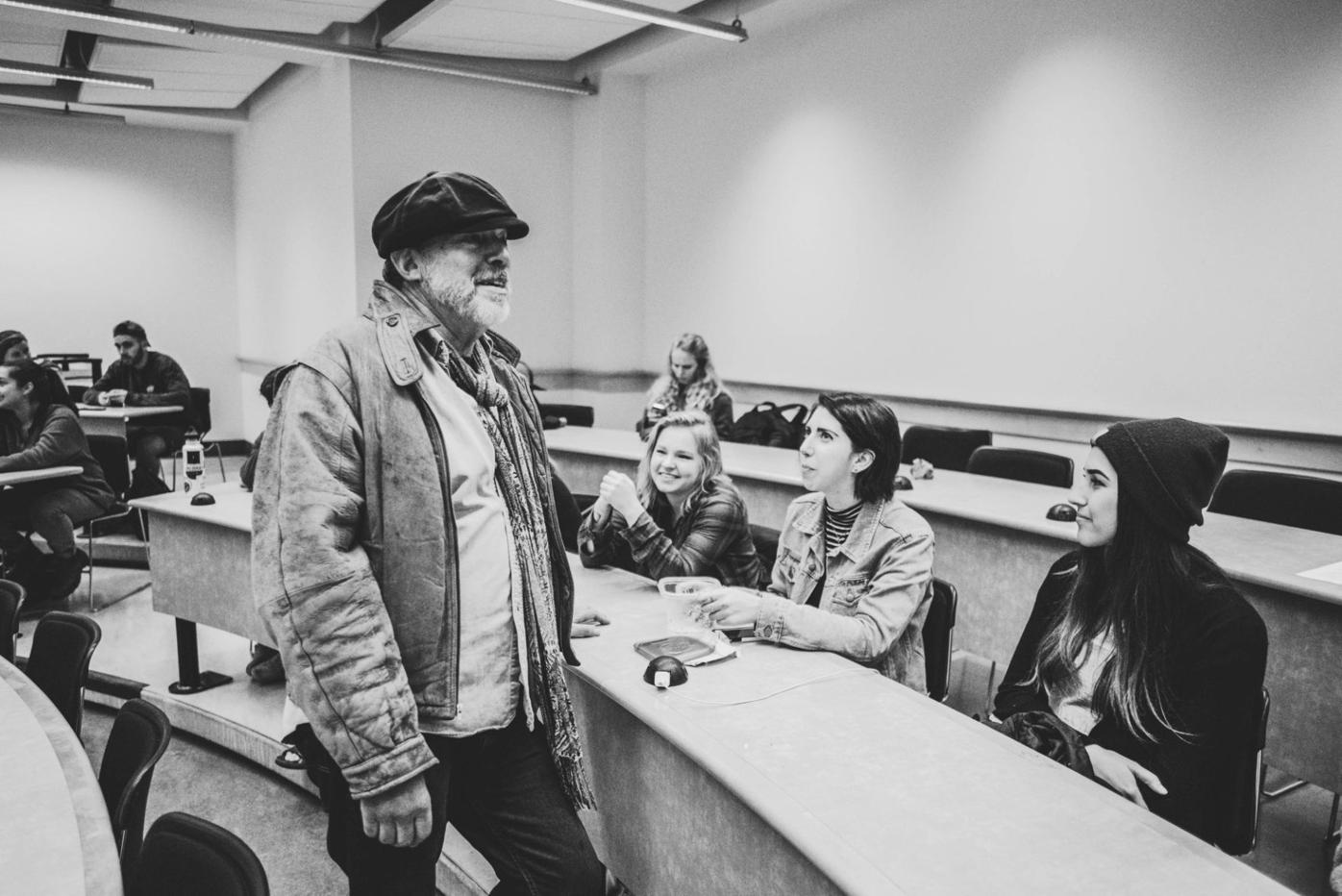 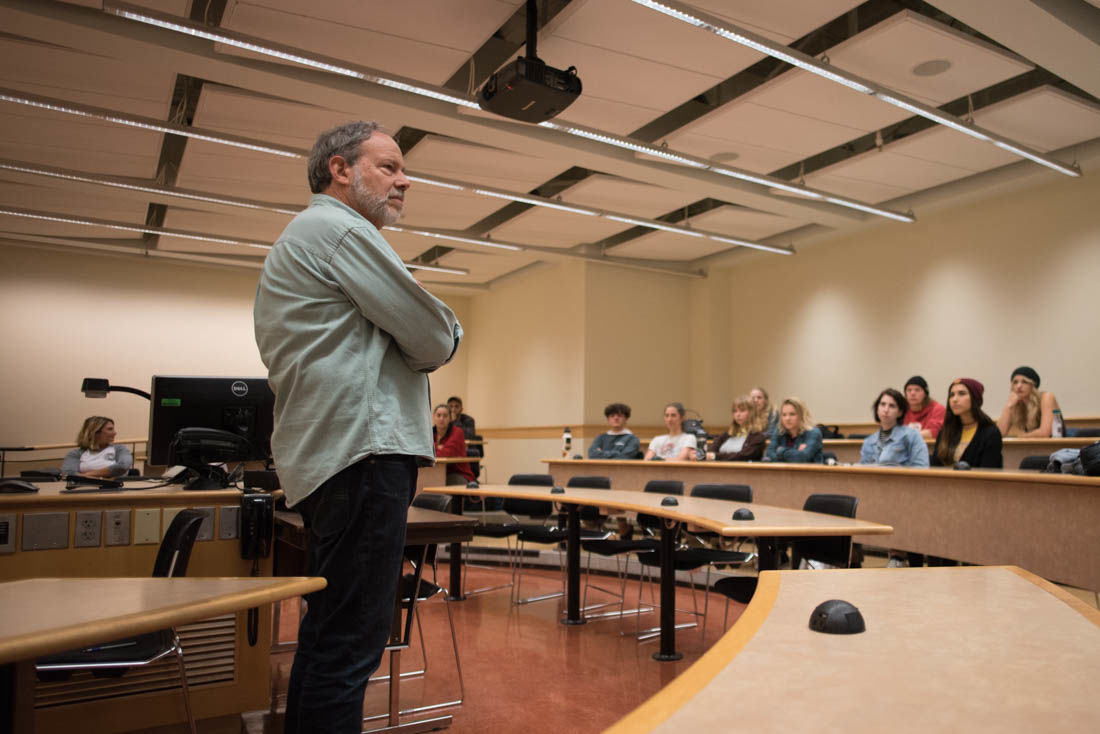 University of Oregon professor Tom Wheeler prepares to speak to members of the Music Industry Collective in the Lillis Complex in Eugene, Ore. on Oct. 12, 2017. (Phillip Quinn / Emerald)

University of Oregon professor Tom Wheeler prepares to speak to members of the Music Industry Collective in the Lillis Complex in Eugene, Ore. on Oct. 12, 2017. (Phillip Quinn / Emerald)

During his classes, journalism professor Tom Wheeler would often joke about lacking a traditional newspaper background before he arrived as an instructor at the University of Oregon’s journalism school.

But to his students and colleagues, Wheeler was a master storyteller. He would regale his students with stories about interviewing music greats including BB King, Keith Richards and Eric Clapton. He loved reading features and students’ work out loud in class as if to savor every word.

The UO community is mourning the loss of Professor Wheeler, who died Saturday night while visiting family and friends in the Bay Area.

Wheeler, who was a professor at the School of Journalism and Communication for about 25 years, was beloved among the community for his dedication to his students, his knowledge and passion for the craft and its future practitioners.

The Emerald reached out to community members via email and social media and received many responses about Wheeler’s impact. Many students echoed that he went above and beyond for them.

Wheeler taught a variety of classes in the SOJC about feature writing, editing, and grammar, but he started his career in journalism as a music journalist in magazines. He freelanced for Rolling Stone and served as editor-in-chief of Guitar Player Magazine before founding Bass Player Magazine in 1988. He was an expert on guitars and wrote many books about their history and significance. When he came to Eugene to teach at the SOJC, he also started playing guitar in bands around town.

Jim Roberts, who worked closely with Wheeler when starting Bass Player, said that Wheeler provided valuable support to him as a journalist. Roberts had no previous editorial experience — only writing and interviewing — but Wheeler hired him as the founding editor at Bass Player.

“I learned so much from Tom it’s hard to know where to start — not only did he teach me how to write and edit better, how to plan issues, how to distribute work among staff and freelancers, and so on, he showed me how to be the kind of person who is a successful editor. He was a true mentor,” Roberts wrote in an email. He added via phone that Wheeler instilled in him the idea that to be successful as a journalist, he had to understand and work well with people.

Allison Del Fuim, an SOJC senior who founded the student Music Industry Collective, remembers cold-calling Wheeler to talk to him about music journalism during her freshman year at UO. She said she wasn’t sure she would ever get a response from him, but he responded right away.

They got coffee together, and Wheeler became a mentor of hers for the next three years. He helped her start MIC and was always around to help with essays and preparing for interviews, despite his busy schedule. Del Fuim says that one of the best takeaways she has from his mentorship was to always be prepared, noting that Wheeler did his research — no matter what story he was working on.

The SOJC community held an informal gathering to remember Wheeler on Sunday evening. Students, alumni and faculty gathered in Allen Hall’s atrium to share memories and reflect on the situation. SOJC Dean Juan-Carlos Molleda said that Wheeler was one of the first faculty members to introduce himself when Molleda arrived in 2016.

“His kindness was real,” she said.

Students and faculty also commented on his vibrant style and homey office. His over six foot frame was easily recognizable on campus because of his detailed scarves and leather shoulder bag. He was frequently found sporting a black cap — one that often provoked comparisons to fellow SOJC professor Peter Laufer.

Chris Jisi, the current editor in chief of Bass Player, only met Wheeler in person once, but said that despite this Wheeler helped kick-start his career like he did for many UO students.

He wrote in an email that Wheeler was a source of support and mentorship when the two worked together at Guitar Player and Bass Player Magazine. Jisi started writing about bass for Guitar Player, and when Wheeler was helping to start Bass Player, he asked Jisi to apply for a job there.

“But it all starts with Tom and I’ll forever be grateful for him giving me my start in music journalism,” Jisi said.

During my senior year at the @UOsojc, I finally got into a feature writing class with the renowned Tom Wheeler. I had heard of him but never laid eyes on him until the first day of class. I quickly noted his bright green converse and even brighter eyes.

Tom Wheeler was a special human + inspirational professor for me while I was at Oregon. The news of his passing is especially devastating for future @UOsojc students who won’t have the opportunity to learn from his hands-on approach + unique experience. https://t.co/0fofmCHOHE pic.twitter.com/jAk0K1g1co