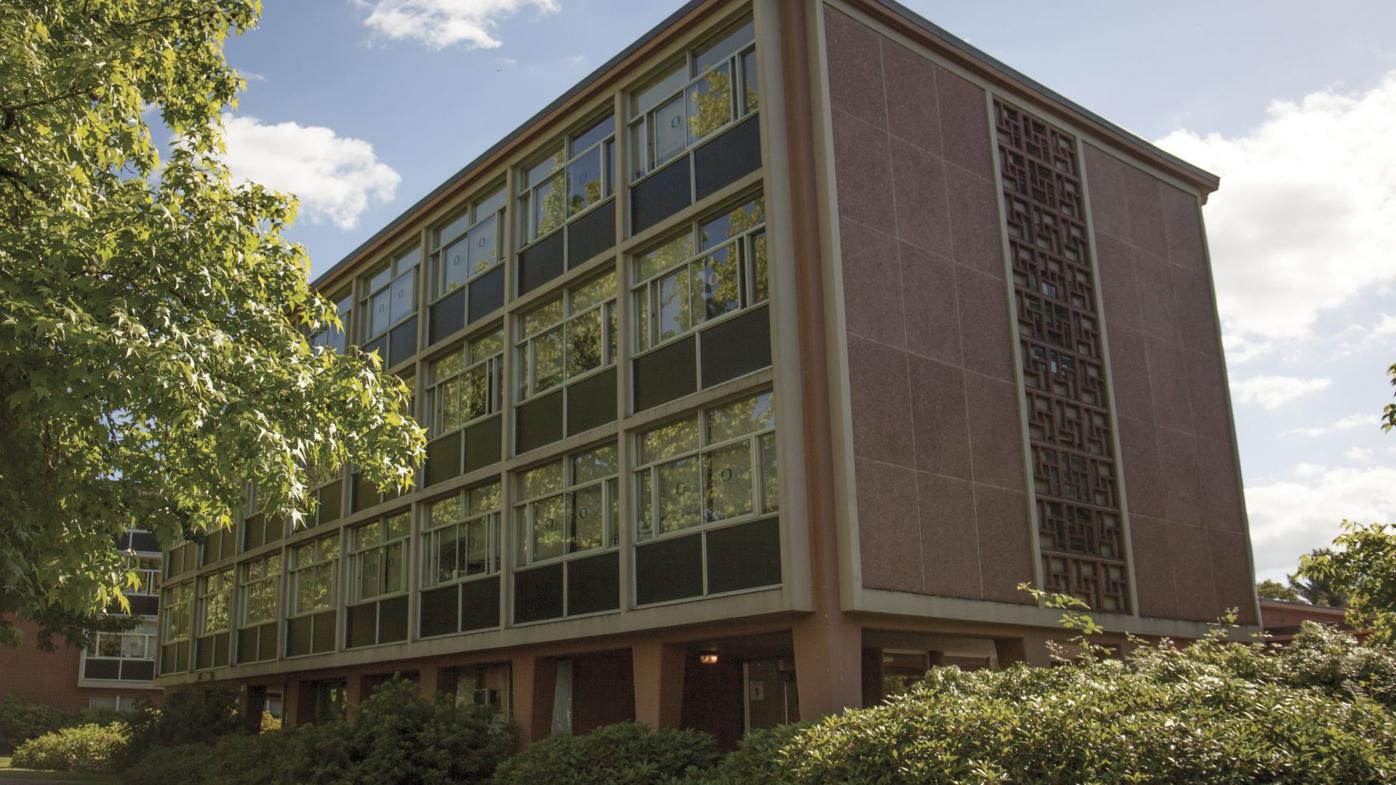 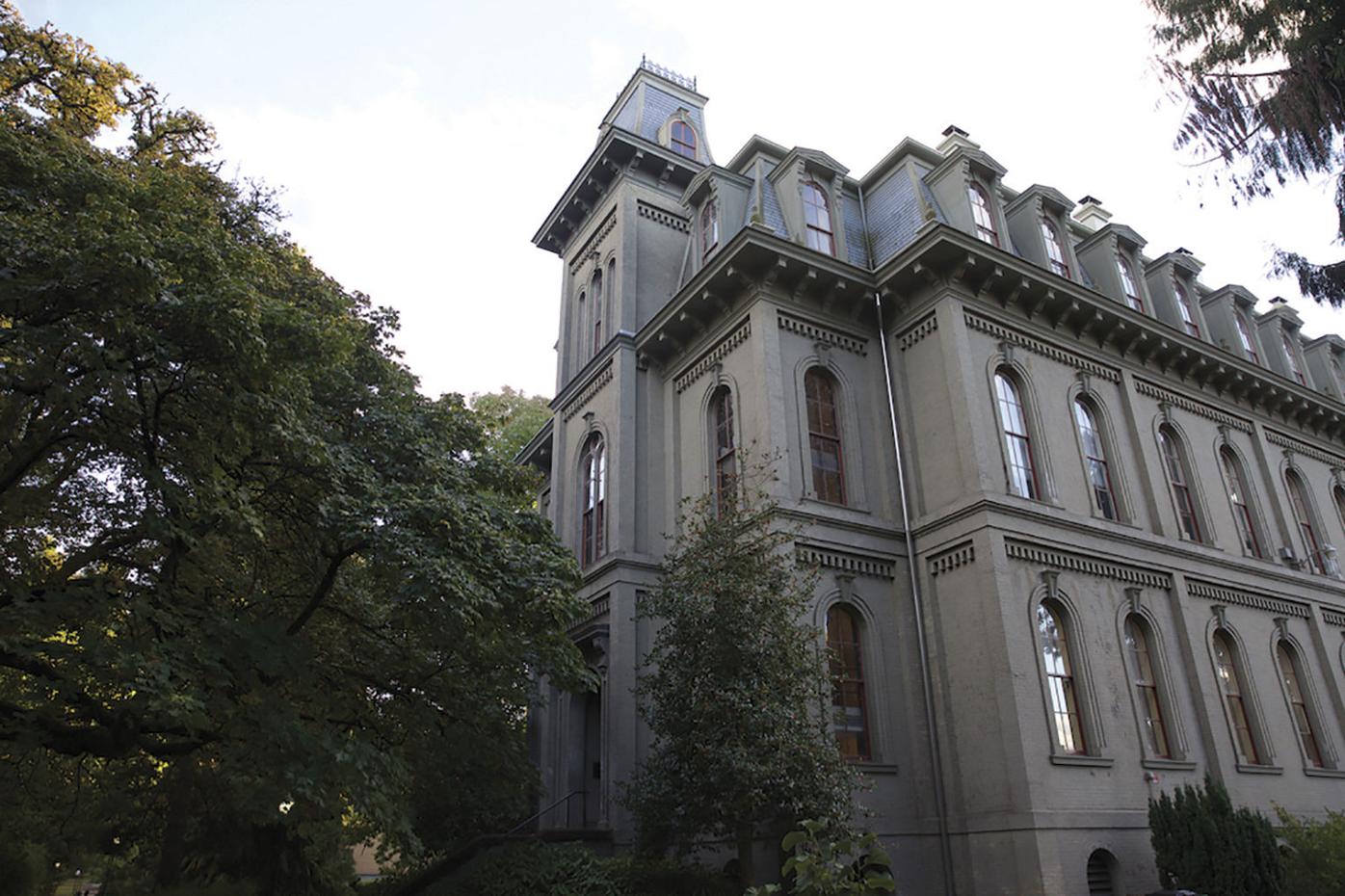 Deady Hall at the University of Oregon. (Eric Cech/Emerald) 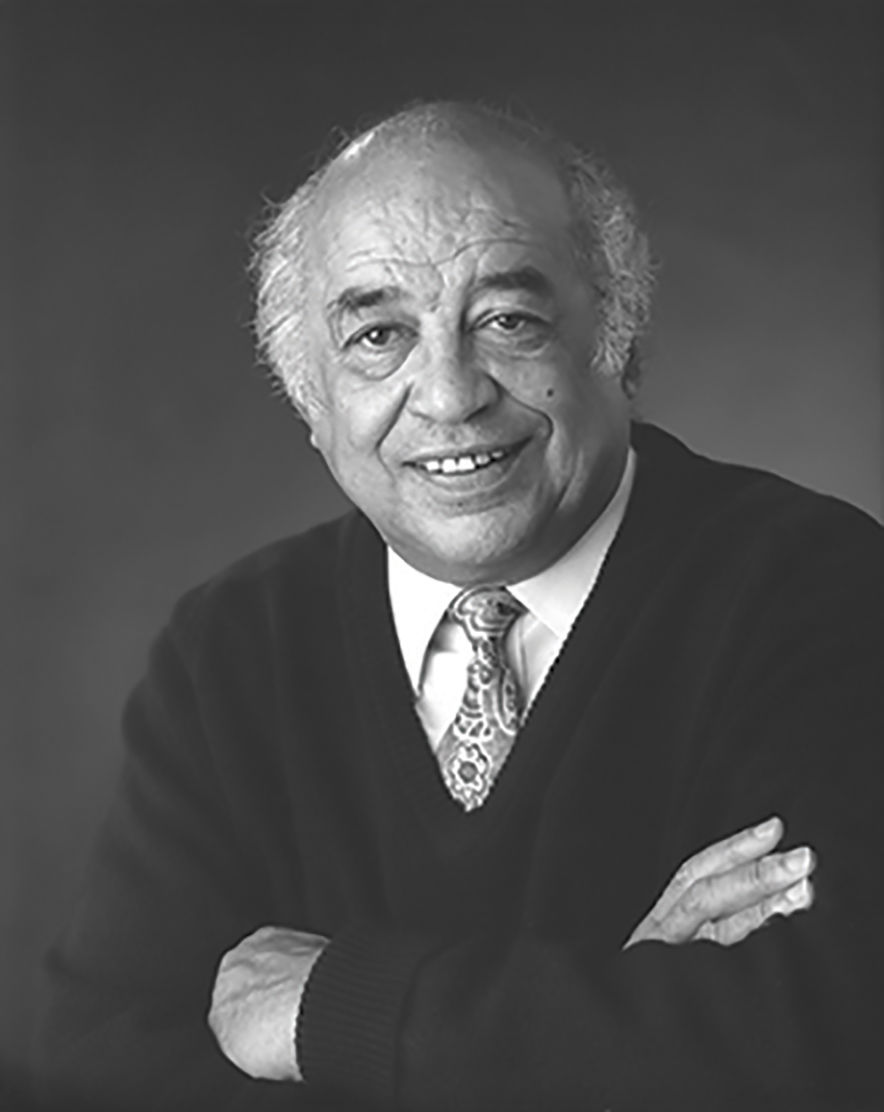 Deady Hall at the University of Oregon. (Eric Cech/Emerald)

But it was always awkward for her when she would lead them past Deady Hall, located behind the iconic business school. The building was named after former Oregon Supreme Court Justice Matthew Deady (1824 –1893), who supported slavery and the exclusion of Black people from Oregon, according to historians hired by the university.

“I would always quote the facts — that this is the first building on campus,” Berguin said. “I was representing the U of O, so I needed to give a positive image, but that history was still there.”

Deady Hall at the University of Oregon. Eric Cech/Emerald

Months later, Berguin protested with around 500 others in front of Johnson Hall, calling for both Deady and Dunn halls (the latter named after a former Ku Klux Klan leader), to be renamed. The protest was led by the Black Student Task Force.

UO President Michael Schill decided against renaming Deady Hall. Deady was also the first president of the university’s Board of Regents. He advocated for the university’s charter to be adopted by the state legislature.

A report on Deady’s history identified he was a delegate for the Oregon Constitutional Convention in 1857, and he debated in favor of slavery. Deady also supported a provision in Oregon’s constitution that excluded African-Americans from living in Oregon. However, following the Civil War, Deady supported the Fourteenth and Fifteenth Amendments of the Constitution, which gave citizenship to former slaves, and granted them the right to vote. Schill concluded that Deady’s later actions suggest that he was a strict constitutionalist, and his views may have changed with the times, thus deciding not to rename Deady Hall.

During a March 17 question-and-answer session at the Emerald office, Schill said that his decision not to rename Deady Hall is final.

Unthank Jr. (1929 – 2000) was the first Black man to graduate from UO’s architecture school in 1951, and designed the Lane County Courthouse and the university’s Mackenzie Hall, among others. Unthank Jr. also advocated on behalf of Oregon’s minority groups for low-income housing and assisted living.

Last Thursday, the Board of Trustees accepted Schill’s recommendation, ending the year-long saga about the renaming of campus buildings. The unanimous vote officially renamed Dunn Hall as Unthank Hall. UO will join the University of North Carolina, Georgetown and Yale in universities that, over the past two years, have renamed buildings originally named after controversial historical figures.

According to Angela Wilhelms, a university president advisor who facilitated the committee, the Schill-appointed renaming committee included Black Student Task Force members. Schill also asked Vice President for Student Life Kevin Marbury for students to include on the team. For advice on faculty, Schill contacted the university provost’s staff. The group was chaired by Eugene City Councilor Greg Evans, and included an African-American history professor at Ohio State.

The committee responsible for selecting the names had been meeting privately since mid-March, Wilhelm said. Committee members received name recommendations by email and phone call, took feedback during meetings throughout the university and distributed surveys from its website and to local media.

Wilhelms said the group did not record the amount of times a name was recommended to the committee. It only compiled the list of candidates in order to consider all suggestions equally.

The group received 65 names, but only 19 fit the criteria. The person had to be deceased, African-American and a contributor to the university. UO spokesman Tobin Klinger estimates that around 20 people nominated longtime English professor Edwin Coleman, who died in January. But Coleman was not considered because it had been less than a year since he died.

“You don’t want to rush to do a naming based on some of the emotion of the moment,” Klinger said.

The committee narrowed the list of nominees to four after applying more detailed criteria. According to the committee’s standards, the nominee must have made notable contributions to UO, have done advocacy work for Black social justice causes or have personally overcome oppression and discrimination.

“I think ahead to the freshmen who will eagerly unpack belongings into Unthank Hall and who will be inspired by this tremendous man to make their own lasting impact on our university, state, and nation,” Schill wrote in a memo to the board, leading up to the final decision.

Berguin, the student who used be a tour guide for the university, is excited about the board’s decision. Unthank Jr.’s sister is her chapter advisor at her historically Black sorority. “Unthank is a name that is so recognized on our campus — I would be so proud of that,” Berguin said.

Two members of the Black Student Task Force, Kena Gomalo and Brianna Hayes, who initially demanded that Deady and Dunn halls be renamed, were on the committee. The group praised the selection of Unthank Jr.

“This decision signifies to the entire campus community that the contributions of African-Americans at the UO have been integral to this university and state’s success,” the Black Student Task Force wrote in an email statement to the Emerald. “Moreover, this decision serves as inspiration for Black students, providing us a constant reminder that we follow in the footsteps of greatness.”

In 2016, the UO hired three historians to investigate the racist legacies of both Dunn and Deady.

Frederic Dunn, a longtime UO professor of Latin, was the leader of the Eugene chapter of the Ku Klux Klan during the ‘20s. Although historians were unable to find records of Dunn personally advocating violence, Schill decided that his affiliation with the Ku Klux Klan was grounds enough to strip his name from the dorm.

Schill said the committee is deciding how to show the historical links of Deady and Dunn to white supremacy.

Since then, Yvette Alex-Assensoh, the Division of Equity and Inclusion’s vice president, circulated a survey to student groups, asking to propose ideas for an exhibit or “educational opportunity,” which could “recognize and commemorate the history of African-Americans at UO and in the State of Oregon, within the context of the names for each of the respective buildings.” According to Alex-Assensoh, the committee is aiming to send a recommendation to Schill on how to acknowledge Deady and Dunn’s pasts by June 30.

Ethnic studies professor Daniel Hosang said he hopes plans to inform the community on racist history would be integrated in campus tours and orientations. “To say something like, for example, there’s been a controversy on [Deady or Dunn’s] name,” HoSang said, “because I think that it would be a mistake to try to divorce Deady with the context of his time, and we should talk about what that context was, which was white supremacy.”

During the Emerald question-and-answer session, Schill said that renaming buildings is a symbolic act, while his initiatives, such as creating a Black Cultural Center counts as an “action.”

“Hold me accountable to actions,” Schill said during the session.

Schill announced during last week’s trustees meeting that he will soon begin discussions with the Black Student Task Force to start planning the $3 million Black Cultural Center. UO spokesman Klinger said the university has raised $1.2 million for the project.

Berguin voiced her discontent with Schill’s decision in not renaming Deady, saying that “Black students shouldn’t ever have to be subjected to take class in Deady Hall.” But she is excited about the upcoming Black Cultural Center project even though she won’t be a student when it is completed. Berguin says it will help incoming Black freshmen feel welcome.

“To have a cultural center, to have a hub, to know where you can get academic support, to navigate campus: I think that would be monumental in helping a Black student’s experience on this campus,” said Berguin.