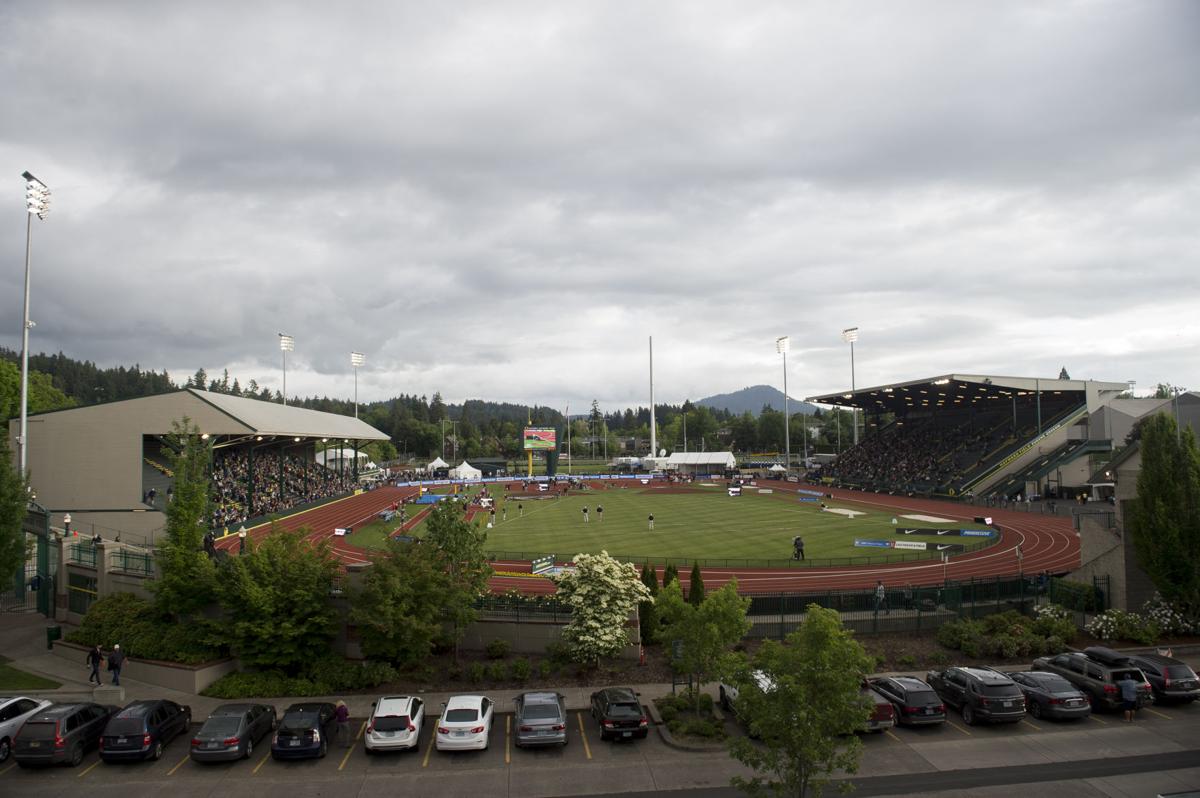 In Eugene’s pitch to host the 2019 IAAF World Championships, two-time Olympic decathlon gold medalist and Oregon alum Ashton Eaton was featured in a video. He talked about the “magic” of Hayward Field during the 1,500-meter race of his world record-setting decathlon at the 2012 United States Olympic Trials. “I … 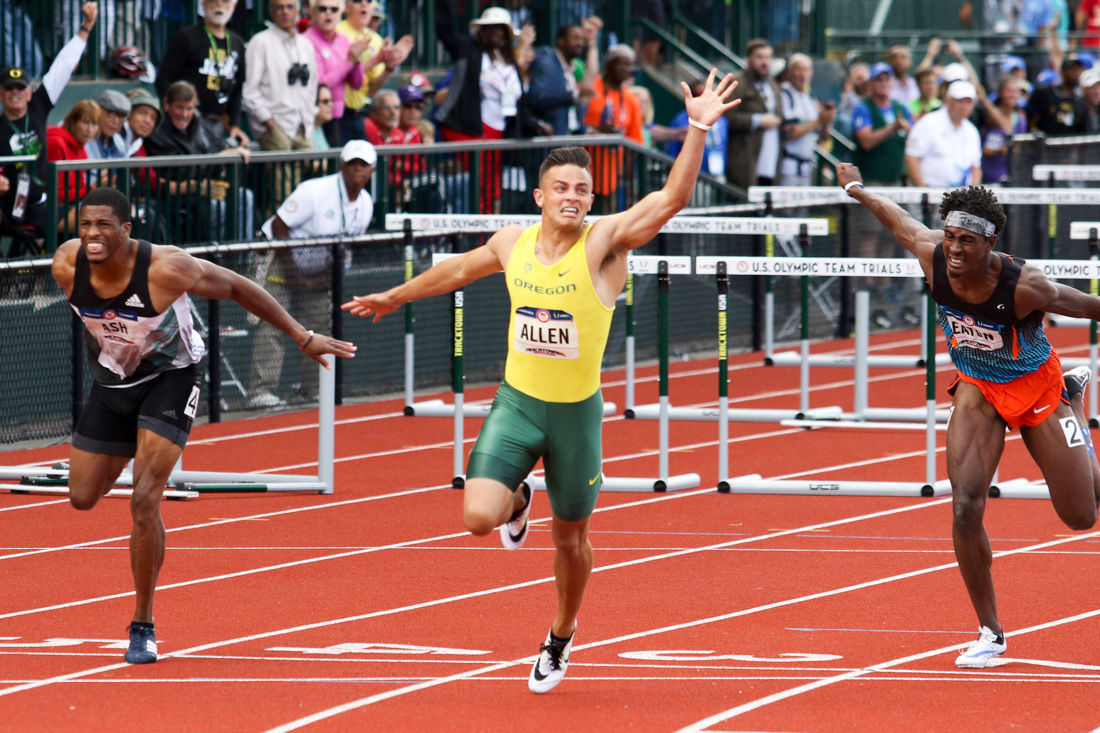 Devon Allen crosses the finish line to win the 110 meter hurdles. The Track and Field Olympic Trials are held at Hayward Field in Eugene, Ore. on July 9, 2016. (Kaylee Domzalski/Emerald) 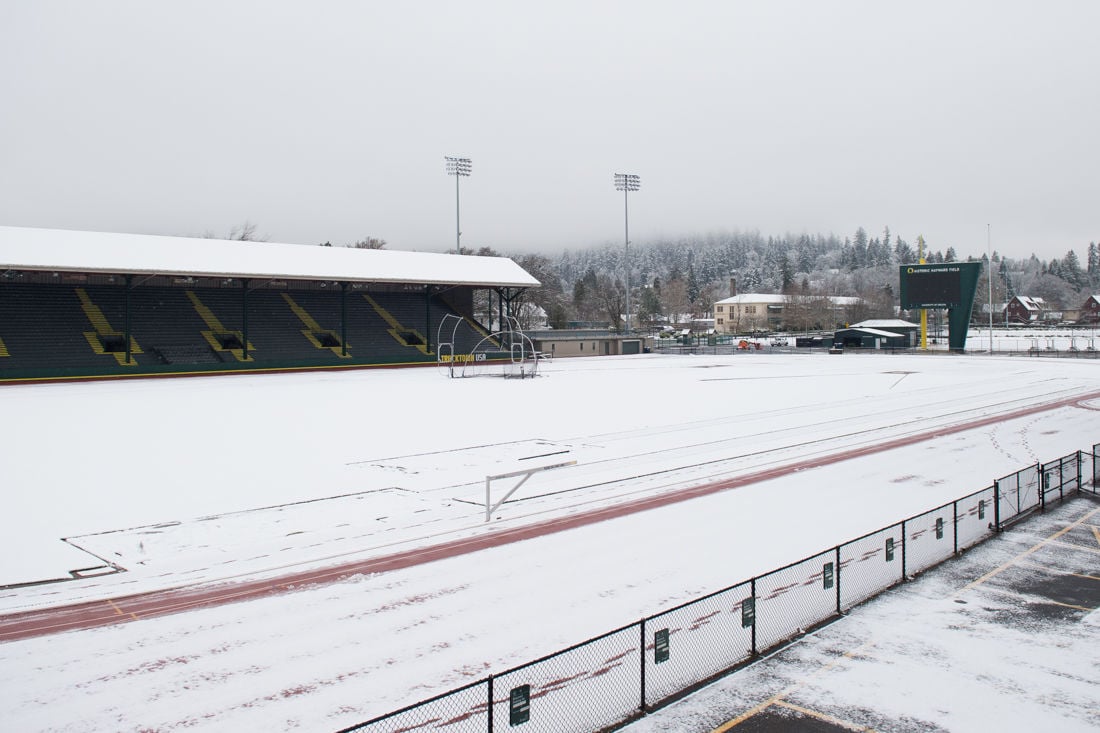 Hayward Field lays covered in a layer of snow after a period of snowfall in Eugene, Ore. on Thursday, Feb. 22, 2018. (Adam Eberhardt/Emerald) 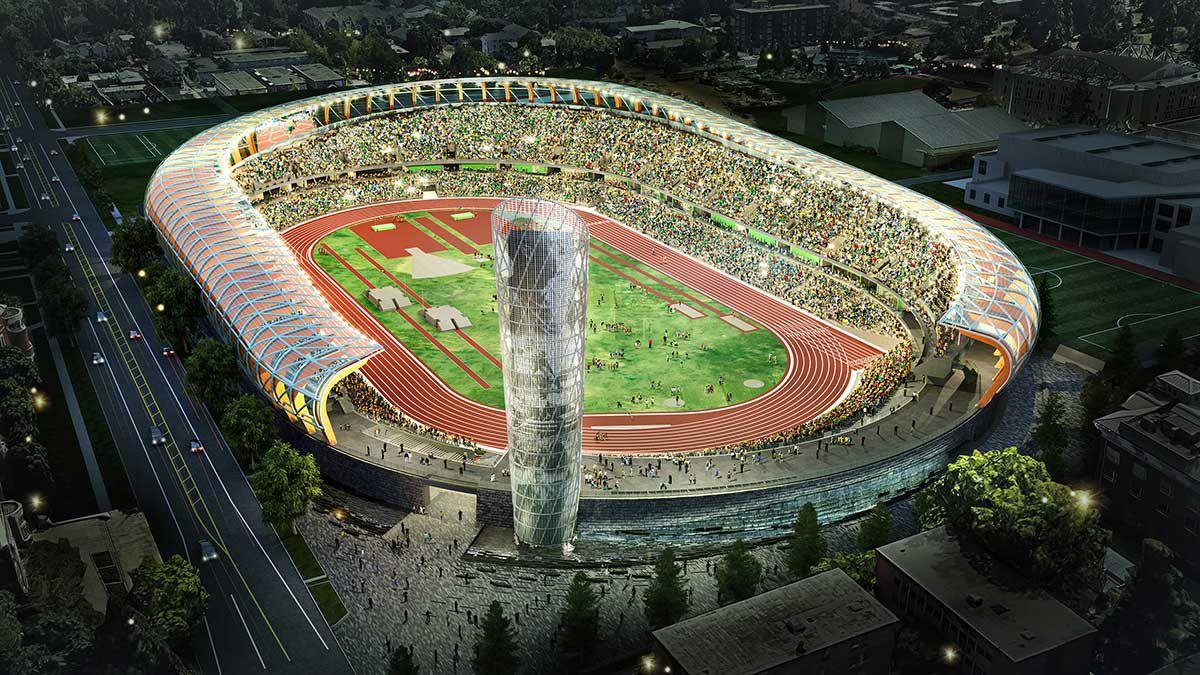 A rendering of the new Hayward Field, slated to open in 2020. (Courtesy of UO)

He talked about the “magic” of Hayward Field during the 1,500-meter race of his world record-setting decathlon at the 2012 United States Olympic Trials.

“I heard the clapping. I heard the yelling,” Eaton said. “I saw people’s hands hitting the side of the east grandstand on the backstretch. At that point I felt ‘I am feeling the magic — this is the magic.’”

With plans to renovate Hayward Field in time for the 2021 IAAF World Championships, a mix of emotions have surfaced from those in support of the construction of the state-of-the-art stadium and those against the complete overhaul of the historic stadium. Some fear it will lose its magic.

Bob Penny has a connection to Hayward Field that not many have. He grew up near Hayward, went to elementary school in what is now UO’s Agate Hall, ran his first race at Hayward when he was 5 years old and was part of Bill Bowerman’s experiments with shoes at South Eugene High School.

A 2016 engineering report came to light recently, revealing that the Hayward East Grandstand is in better condition than reported. Reports that said the East Grandstand was not fixable were proven false.

“There’s rot in places. There’s surface rot in places that you’d expect,” Penny said. “Nothing that you wouldn’t expect for a building that’s 100 years old. To keep a hundred-year-old building going, you’ve got to be doing things every year to keep it going.”

Penny’s proposal to make Hayward a historical city landmark was struck down by the city council because he isn’t the property owner, and therefore the construction can continue.

University of Oregon President Michael Schill sent a letter to the city council, stressing the importance of getting the renovation done in time for the 2021 championships.

That was a blow for the East Grandstand Supporters group, but it hasn’t deterred them. According to Penny, nothing will compare to the way the stadium is now.

Not only will the stadium get a new look, but the area around it will too, including 23 trees nearby Hayward that are set to get torn down.

This could play a role in the fight over the renovation, as residents and local activists push back against UO, which would have to pay for all the trees to be removed according to city code. UO does plan to put in replacement trees while the Eugene forestry and Public Works will make a decision on the trees by June 9.

In an email published by the Oregonian, the original designer for the new Hayward Field, Tinker Hatfield, voiced his displeasure regarding the changes from his original design that included the East Grandstand.

“The demolition of the EAST GRANDSTAND is unnecessary and completes the severing, only this time I am referring to the important connections from past to future,” Hatfield wrote. “…Once the EAST GRANDSTAND goes down, (city ordained) street setbacks kick in and the number of seats go way down as does the encouraging RUMBLE of the wooden structure when all 4,800 stomp their feet.”

Hatfield also referred to the structural report, writing, “ANYBODY who says the EAST GRANDSTAND is unsound is being untruthful.”

In an exclusive interview with the Register-Guard, Nike founder Phil Knight was asked about the East Grandstand’s demolition.

“I’m sure of one thing: When those bulldozers in July knock that East Grandstand down, I am the most reviled man in Eugene,” Knight said.

Opened in 1919, Hayward has hosted countless events, even serving as the home of Oregon football in its early days. But the best memories for Hayward Field have come from the sport it solely houses today — track and field.

“You can’t beat it,” hurdler Devon Allen said. “This is my favorite place to run by far. When it’s 65, 70 degrees and sunny and a tail wind, you can’t beat that.”

Allen’s connection to Hayward Field runs deep, having run as a Duck and qualified for the 2016 Olympic Games there. It builds a bit of pressure for Allen when he returns now as a professional, but it only drives him to keep coming back to perform at his best.

“I expect a lot for myself and I want to compete well in front of my home fans,” Allen said. “But I think I have an advantage. They’re rooting for me no matter if there’s record holder or world champ. I get the loudest cheer so it’s pretty cool.”

He’s not the only Oregon alum to feel that pressure. For distance runner and 2016 1,500-meter Olympic champion Matthew Centrowitz Jr., Hayward is part of his family — Matthew Centrowitz Sr. competed for the Ducks at Hayward during the 1970s.

For Centrowitz Jr., one memory that comes back to him at Hayward is his first U.S. Championship win in 2011 while he was still an Oregon runner. It was the first night he went out and partied during college.

“I remember asking guys that had gone out before me and the guys on the team and was like, ‘Is going out always that fun?’ and they were like, ‘Absolutely not,’” Centrowitz Jr. said. “I was like, ‘Good’ because I felt like I might have missed a lot of my college experience.”

Going to Oregon paid off for Centrowitz Jr., who said that when he first visited Oregon with his dad, he did not see himself attending the university. But after an official tour, he fell in love.

“[Hayward] definitely lived up to its expectations,” he said. “When you come back here and they announce your name and talk about being a former Duck, you get that extra boost, that extra applause in the crowd and that’s what we look for in the last lap — that last 100 meters. That little extra ‘oomph.’”

That “oomph” is referenced by all athletes, not just those associated with the school or state.

Chinese sprinter Su Bingtian says he feels a connection to Hayward Field, where he set his personal best in the 100 meters.

“This field, it means a lot,” Bingtian said through a translator. “Before everything gets torn down, I want the No. 1 lane to put it in my home. It was the lane I first ran in here.”

Knight said that the memories of Hayward won’t be lost with the new stadium.

“Those are ghosts that will be there forever,” he said. “I think they’ll be there in the new stadium as well. The object is to give it the best chance to continue those memories and those ghosts, and that’s what I’ve tried to do.”

Track and field-specific stadiums are uncommon in the U.S. The new Hayward Field, which resembles Helsinki, Finland’s 1952 Olympic Stadium — a horseshoe shape that Penny compares to a toilet bowl with a large tower — will be worthy competition with other track and field stadiums around the world, comparable to those that host Olympic Games.

“There’s plenty overseas, and so for it to be a track-specific stadium like that is going to be huge,” American sprinter Christian Coleman said. “Hopefully I can make that World Championship team and compete here.”

But, the attractive venue was criticized by Hatfield.

“For all that moola you get a fancy looking stadium but you get a second-rate PERFORMANCE venue and a third rate INDOOR training facility,” Hatfield said in his email.

Hatfield said in the email that the new design “does not work” because the roof is not functional and does not protect most fans from the wind and the rain.

“The magic of Hayward Field is really the crowd,” Hatfield said in the email. “Keep ’em dry and they will come. Let ’em get wet and they will NOT come.”

Hayward Field’s draw currently exists from its history, but with the renovations, the attraction will be for the modern facilities, which will be on the world’s stage in the 2021 IAAF World Championships.

Eugene was awarded the 2021 championships without a formal bidding process, leading to an FBI and IRS investigation and subpoena.

The new stadium might be ready in time for the 2020 U.S. Olympic Trials, which USA Track and Field reopened the bidding for, stripping it from Mt. San Antonio College.

That sped up the process for Hayward’s renovation, and the latest plans were set in place and announced by the university in April.

Despite the bittersweet feelings, some have simply accepted it.

“Now it’s starting to hit me,” 400-meter world champion Phyllis Francis said at the 2018 Prefontaine Classic. “It’s so great to be out here with the fans, it just brings back memories of my college years.

“Out with the old and in with the new.”