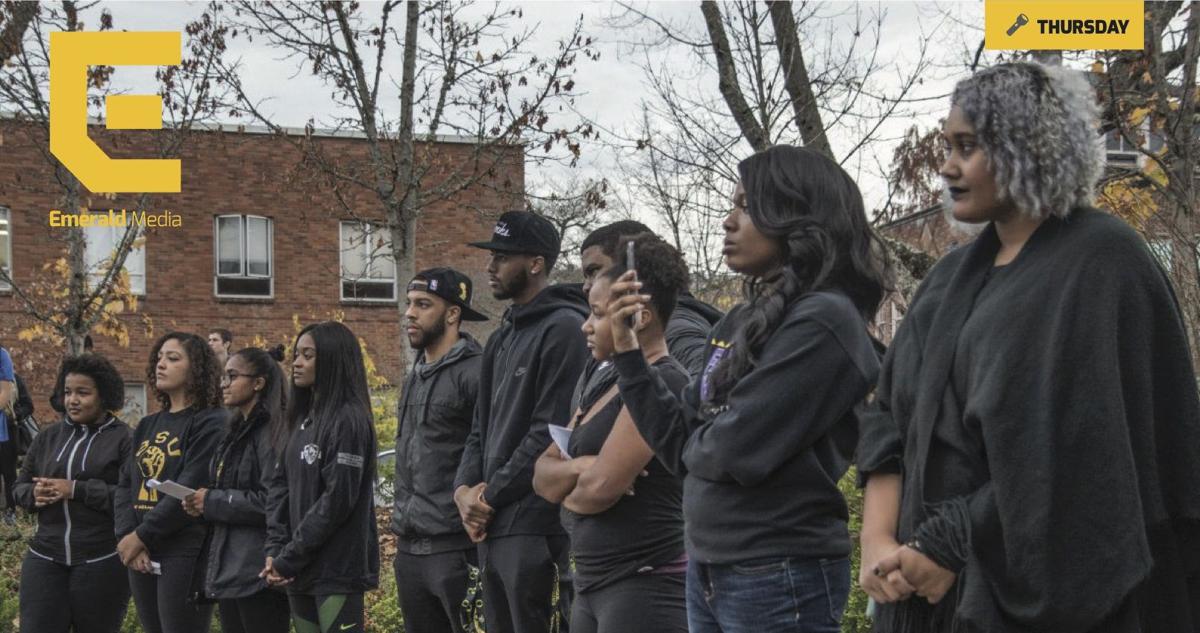 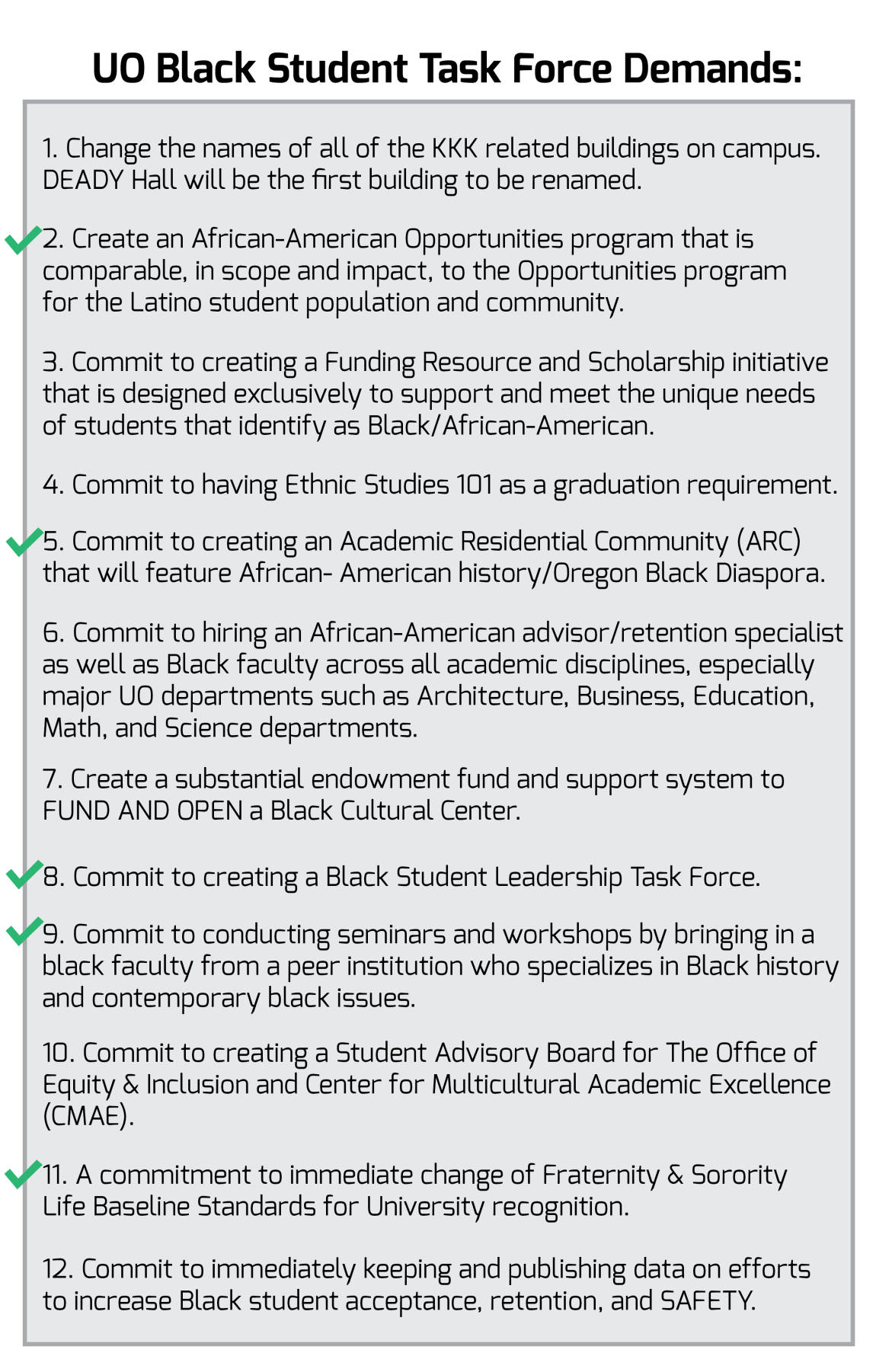 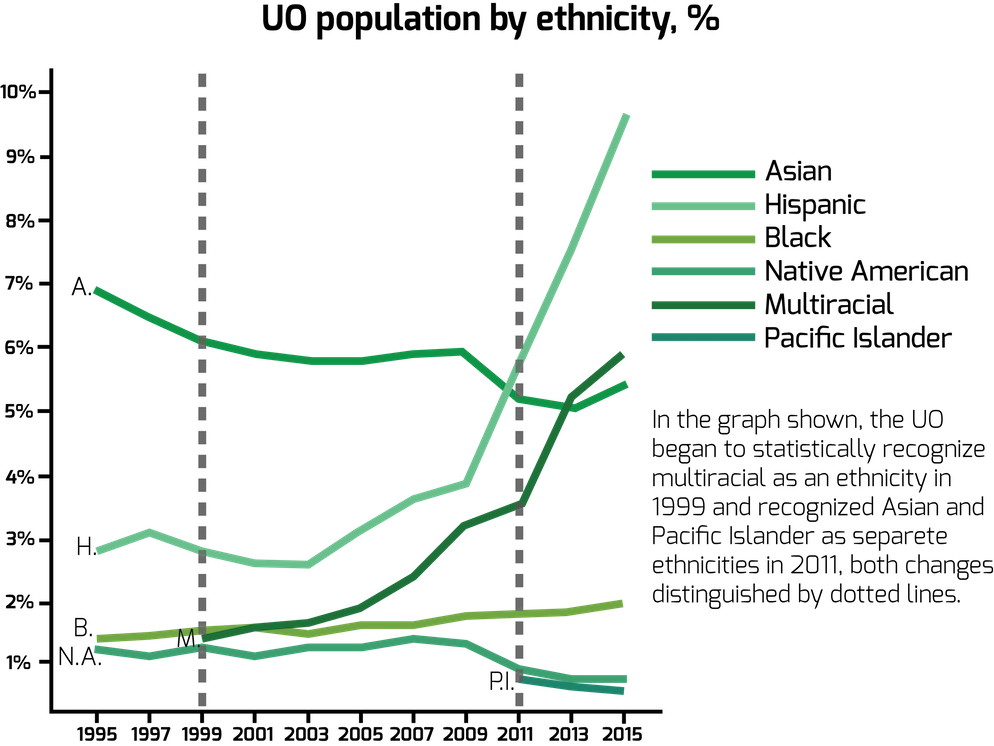 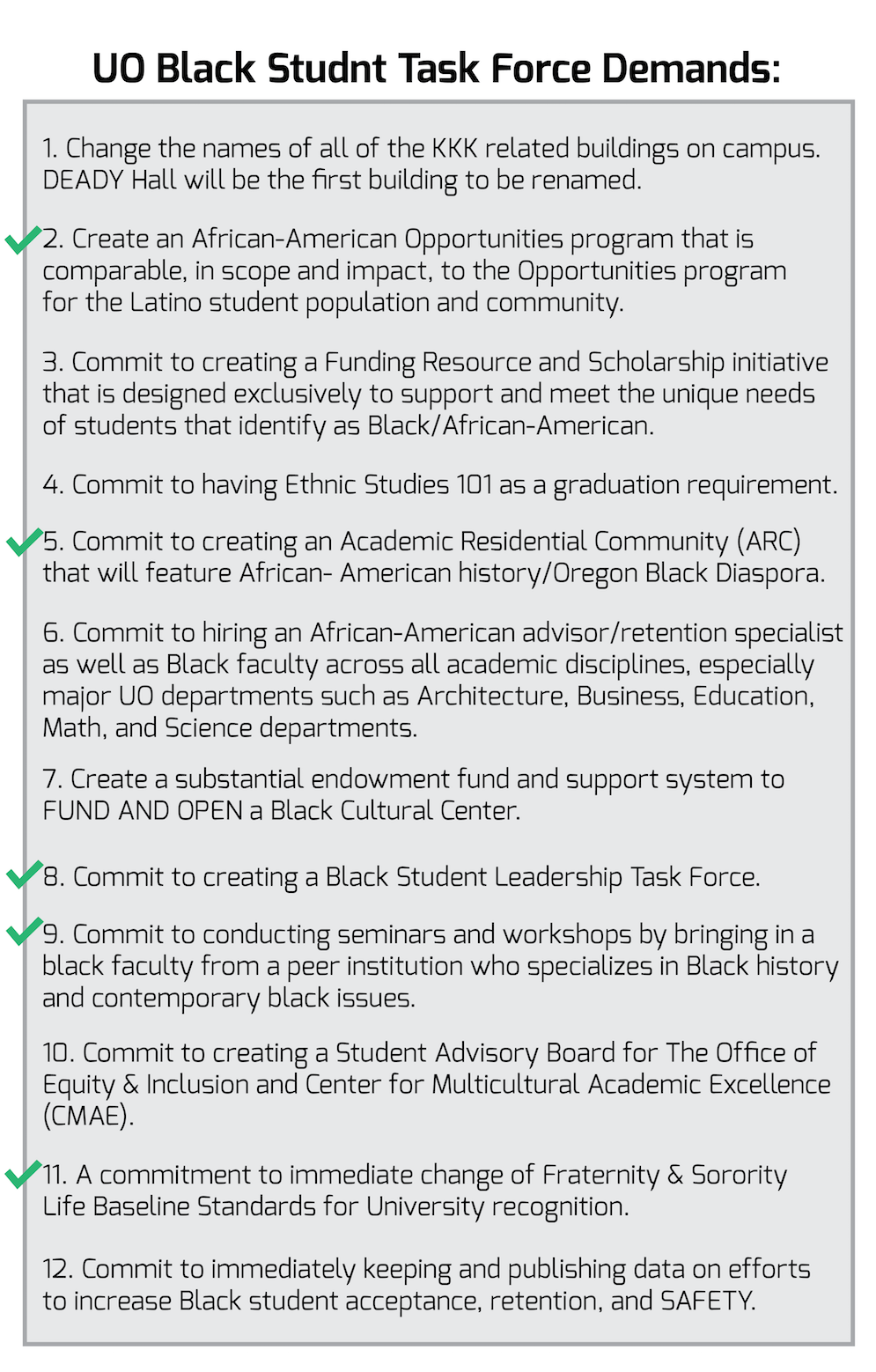 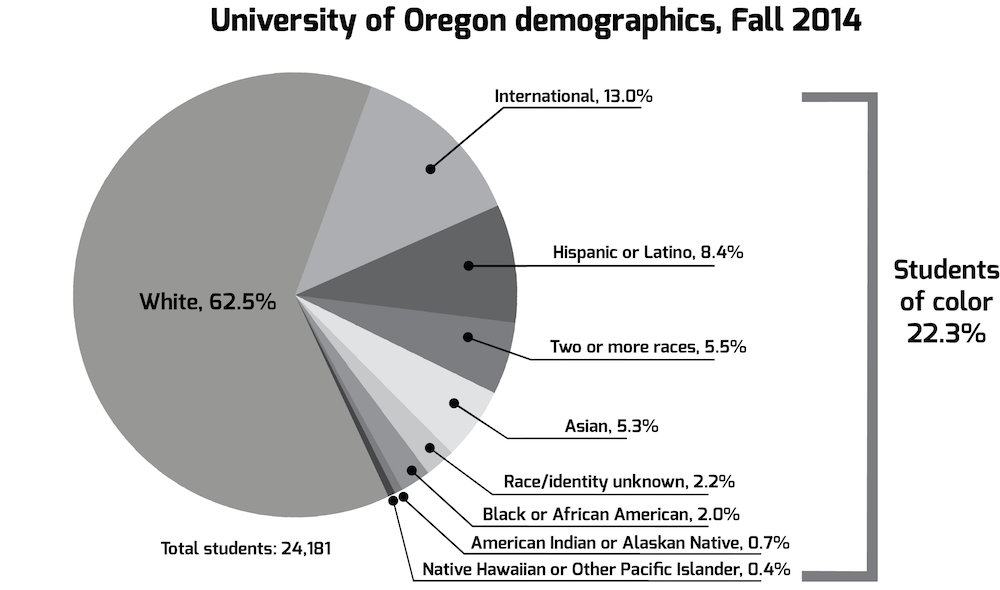 On Nov. 11, Black student group leaders spoke to hundreds of students and community members at the EMU amphitheater, addressing the climate around race on campus. It’s been a year since the Black Student Task Force issued 12 demands to UO administration in the hopes of creating a safer and more inclusive university.

The revisiting of these demands, which include renaming buildings named after KKK members, comes in the wake of discriminatory events on campus.

Members of the Black Student Union have received racist threats online. On Halloween, a UO professor wore blackface at a private party, and on Nov. 9, high school students donned blackface at UO, offending community members on a campus that is intended to be a safe space, according to President Michael Schill. These recent racially related events may be forcing some UO Black students to reevaluate where they fit into the priorities of the university.

Of the 12 demands made by the BSTF a year ago, less than half have been fulfilled.

UO’s Black students are frustrated that after a year of pushing for demands, they’re still fighting for progress. On Friday, they rallied together in solidarity, determined to continue the march forward.

“We experience things that most of you probably have no idea how it feels,” Natashia Greene, external coordinator for the Black Student Union, said to the crowd on Friday. “One of our main goals is to really make sure that our students feel safe.”

Instead of allowing Black students to feel safe and included, many feel the climate on campus subjects them to overtly racist attitudes and sentiments.

“The reality of it is that stereotypes tend to overshadow the hard work we really put in in order to get into higher education,” Chris Holloway, a member of the Black Male Alliance, said at the rally.

Roger Thompson, vice president for enrollment management is one of the people working to solve issues Black students face at the university. He said he has been pleased to see bolstered recruitment efforts of Black students in recent years. He notes that UO was the first university to support Good in the Hood, a non-profit organization that offers scholarships to graduating high school students in Northeast Portland. The university also created a sponsorship and scholarship program with Jefferson High, a predominantly Black high school in Portland.

“In the last seven years, we have gone from about 18 percent of our freshman class being domestic minority students to 31 percent this fall,” Thompson said. “We have made the freshman class far more diverse than it has ever been before.”

“I worry sometimes we don’t do enough through the sophomore, junior and senior years,” Thompson said. “We are dependent on this idea that as a freshman, you are going to connect in the right ways. I do worry that there should be more formal things through the rest of those years.”

Drake Hills, co-director of the Black Male Alliance, believes that the lack of support is partly due to statistics encompassing multiple ethnic minorities rather than individual ones. Hills feels that this marginalizes the importance of individual racial identities on campus.

“Multiculturalism is essentially this big bucket,” Hills said. “The university has dumped all these minority cultures into one bucket … and tried to dilute the experience.”

“We have created systems to oppress these people for so long. We can create systems to support them to do better,” he said.
The administration has come under fire most recently due to a lack of direct action on a UO employee’s use of blackface.

The UO law professor said she dressed in blackface in order to, “provoke a thoughtful discussion on racism in our society, in our educational institutions and in our professions,” according to the apology she released through Pat Walsh, the media relations professional hired by her attorney.

“It’s more than just the actual putting on of blackface,” Hills said about why the action is so harmful. “You’re pretty much calling us animals, calling us rapists … that’s what blackface is.”

One week later, UO student Zoie Gilpin, on her way home from a Black Student Union meeting, ran into three non-UO students painting their bodies in black paint. The video was widely shared on Twitter and appeared as the opening scene in a New York Times video about racial tensions on campuses following Donald Trump’s election.

In the wake of these racist actions, the Black student community has stressed the importance of the BSTF demands.

Three of the seven demands that have not been fulfilled were assigned a fall 2016 deadline by the BSTF. The call to rename KKK-related buildings on campus was answered in part, as the Board of Trustees denamed Dunn Hall, but Schill has yet to introduce a vote on denaming Deady Hall, as the BSTF demands specifically mention.

Natashia Greene raises her fist as she concludes her speech. The Black Student Task Force holds a Black Community Rally in the EMU amphitheater on Nov.11, 2016.

While the renaming of halls has received the most attention, a number of other demands have not been addressed by administration.

An email to the Emerald from UO spokesman Tobin Klinger provided up to date information on how the university is addressing the other demands.
The university is “recruiting a professional advisor in the teaching and learning center that will have expertise in addressing the challenges experienced by Black students in STEM fields,” Klinger said.

A piece of land has been reserved on the corner of East 15th Avenue and Villard Street for a Black Cultural Center and the university is exploring fundraising $3 million for the project.