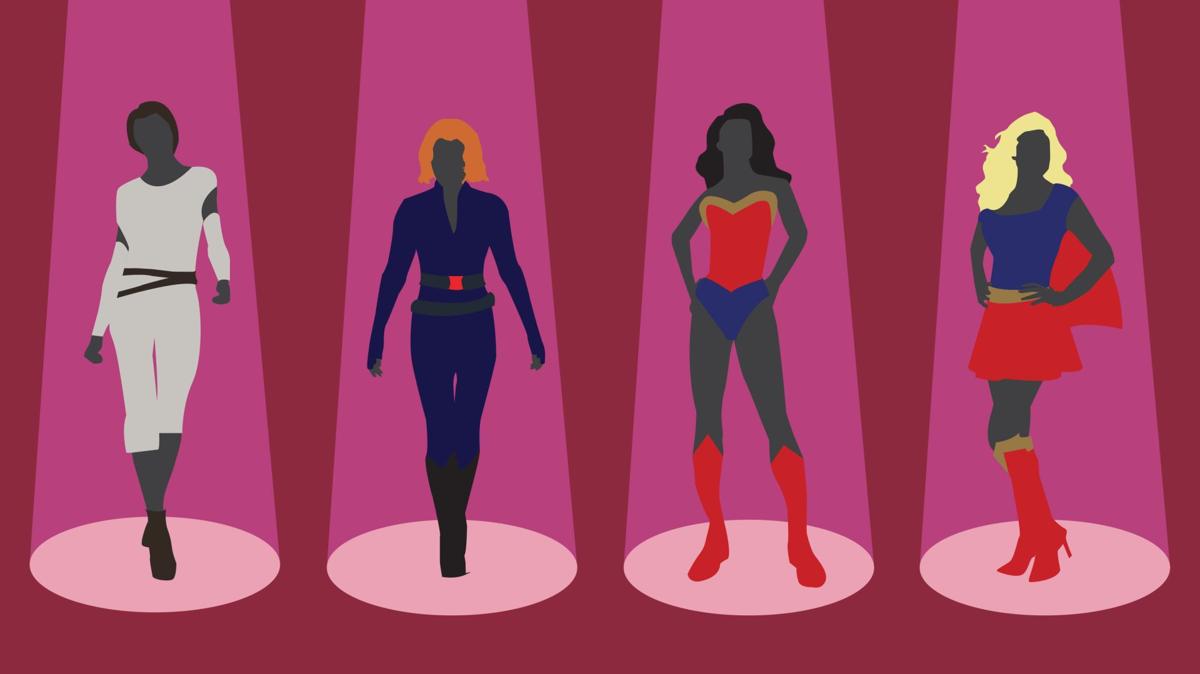 ‘Bechdel Test Burlesque’ will be coming to the UO on Friday, April 29. (Jarred Graham) 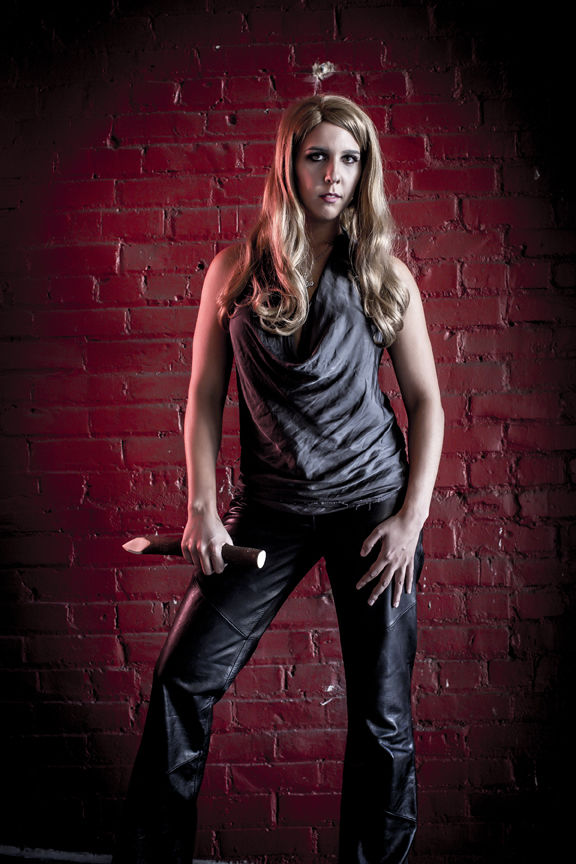 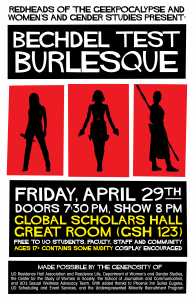 ‘Bechdel Test Burlesque’ will be coming to the UO on Friday, April 29. (Jarred Graham)

Editor’s note: An earlier version of this story said that the online campaign known as Gamergate was collectively behind some reports of harassment against women in video game culture. The instances are from a select few people, not necessarily the ethos of the movement as a whole.

JoJo Stilletto’s first exposure to the world of burlesque happened inside a University of Oregon classroom.

“When I was a freshman, I was tossed into a campus production of The Rocky Horror Picture Show completely blind. Within a year, a few friends and I were running a local cast,” remarks Stilletto, more commonly known by her non-stage name, Jessica Obrist.

A journalism alum from the class of 2000, Obrist holds a day job in the world of advertising. But she has another degree, this one self-proclaimed: She is the “Professor of Nerdlesque, world’s leading expert in nearly naked nerds,” – and her show Bechdel Test Burlesque will be coming to the UO on Friday, April 29.

Bechdel was the product of Obrist and four other women, united by burlesque’s unique ability to satirize and highlight both the body and brain. It’s a geek-focused comedy and dance show that celebrates the female form while also paying homage to female heroes. The show takes iconic female characters, new and old, and places them in skits that satirize the patriarchal elements of their respective stories.

“It’s important that we can do a skit about Ruth Bader Ginsburg on the same stage as one about a Star Trek captain,” Obrist said.

While the term burlesque may conjure ideas of strip clubs or other forms of shallow sexual pageantry, Bechdel follows in the art-form’s legacy of social critique.

“The original burlesque shows would satirize contemporary operas and politics while wearing form-fitting costumes. Burlesque has always been a way for women to use their bodies and sexuality [by] calling it art,” Obrist said.

The show gets its namesake from the Bechdel Test, a feminist theory introduced by graphic artist Alison Bechdel. It’s a simple test: If a film features at least one conversation between two named female characters, do they talk about any subject other than a man or a relationship? Despite this low bar, most films fail the test.

Bechdel Test Burlesque is making an appearance at UO thanks to a visiting professor at the women and gender studies department, Ed Chang.

Chang has taught multiple classes about pop culture at the UO, including explorations into the worlds of director Joss Whedon and live-action role playing. When Chang came to UO, the university worked with him to get an Underrepresented Minority Recruitment Grant — typically used to attend conferences and provide research materials. Chang set a portion aside to bring an outside educator to the university.

“It’s important that we can do a skit about Ruth Bader Ginsburg on the same stage as one about a Star Trek captain.”

Rather than a guest lecturer, he reached out to Obrist — an old friend in the Seattle burlesque community. Alongside fellow producer Sailor St. Claire, she had previously put on Bechdel Test Burlesque for Seattle’s GeekGirlCon.

“What’s really great about it … is that it takes these female characters from literature or pop culture and highlights their intellect, their power, their strength, their feminist principles, things like that,” said Chang. The show features many modern characters, like Rey from Star Wars: The Force Awakens and The Avengers’ Black Widow

While Chang admits representation of women in entertainment has improved, he also says there’s still a ways to go. “These characters still often get subordinated to men, or they are not as three-dimensional as they could be.”

Artistic statements like Bechdel Test Burlesque have never been more relevant, with the representation of women in nerd media becoming a hot-button issue online. Those opposed to the social politics of female inclusion in nerd media have become a venomous force and have staged online harassment campaigns against women.

Some of these inflammatory remarks come from those who’ve piggybacked on the hashtag #GamerGate from the online ‘GamerGate’ community. Cultural critic Anita Sarkeesian, creator of the webseries Feminist Frequency, was one such target for these threats.

“Feminist speakers like Anita Sarkeesian can’t even speak in public without threats of violence,” remarked St. Claire in reference to an incident last year when Sarkeesian’s planned appearance at Utah State University was cancelled when she was threatened. “But being scared is not the answer.”

By continuously vocalizing the movement, St. Claire posits that this the best way to turn bystanders into allies and allow the “dark places of the web to wither up and die.”

For the performers of Bechdel, it’s an opportunity to go above and beyond in expressing their personal fandom. Maxie Milieu grew up with Buffy the Vampire Slayer — watching every episode recorded on VHS, a massive collection inherited from a close friend. That relationship with the show has inspired her to portray Buffy on stage multiple times, in various iterations. Bechdel Test Burlesque marks her third time with the character.

“I’m searching for a way to do a badass Buffy act — trying to bring something awesome and empowered,” Milieu said. “I didn’t want to just go on stage and do a sexy dance as Buffy. There’s so much more to the character than that.”

Sin de la Rosa brings various characters to life on stage, but holds a deep connection to those from the world of Star Trek. As a biracial kid in the mid-90s, she found unlikely representation in B’Ellana Torres — a half-human, half-Klingon woman in Star Trek: Voyager.

“A lot of her struggle to exist simultaneously in two cultures really struck me when I was a kid,” de la Rosa said.

She describes the process of bringing any character to the stage as “creating a Frankenstein,” where elements of her own personality combine with the fictional persona.

While many perceive burlesque to be a voyeuristic artform, the team behind Bechdel proves the power of agency. This is titillation done on their terms. De la Rosa remarks, “If you are a feminist woman, there’s an underlying fear that being sexualized means falling into the male gaze. Burlesque means saying it’s okay to feel okay about yourself.”

St. Claire has been a member of the burlesque scene since 2009 and holds a doctorate in English literature from the University of Washington. She sees burlesque as “an extension of the body” in female-driven storytelling. Feminist critique of pop culture is a deep well of conversation, but one that St. Claire feels can be “less focused on women’s sexual lives, more about intellectual. Bechdel Test Burlesque is about blending them together.”

In addition to celebrating these female characters, Bechdel also critiques the stories from which they come. The goal is criticism that can celebrate something beloved while acknowledging the need for change. St. Claire feels that learning through fun is a vital tool in social discussion, rather than wholly focusing on classroom conversations that may miss the power of real-world practice.

“When we use art to show what art is doing, it’s so powerful,” she said.

As the show approaches, Obrist is honored to be brought back to the UO and credits the school for her unique style of performance.

“Thanks UO, for making me into such a special weirdo,” she said.

Bechdel Test Burlesque will open at 8 p.m. on Friday, April 29 in the Global Scholars Hall Great Room (GSH 123). Doors open at 7:30 p.m., and cosplay is encouraged. UO Students are invited to attend, free of charge.  As you may expect, the show contains some nudity and is thus 17+.

Correction: An older version of this article used an incorrect spelling of visiting women and gender studies professor Ed Chang. This error has been corrected.