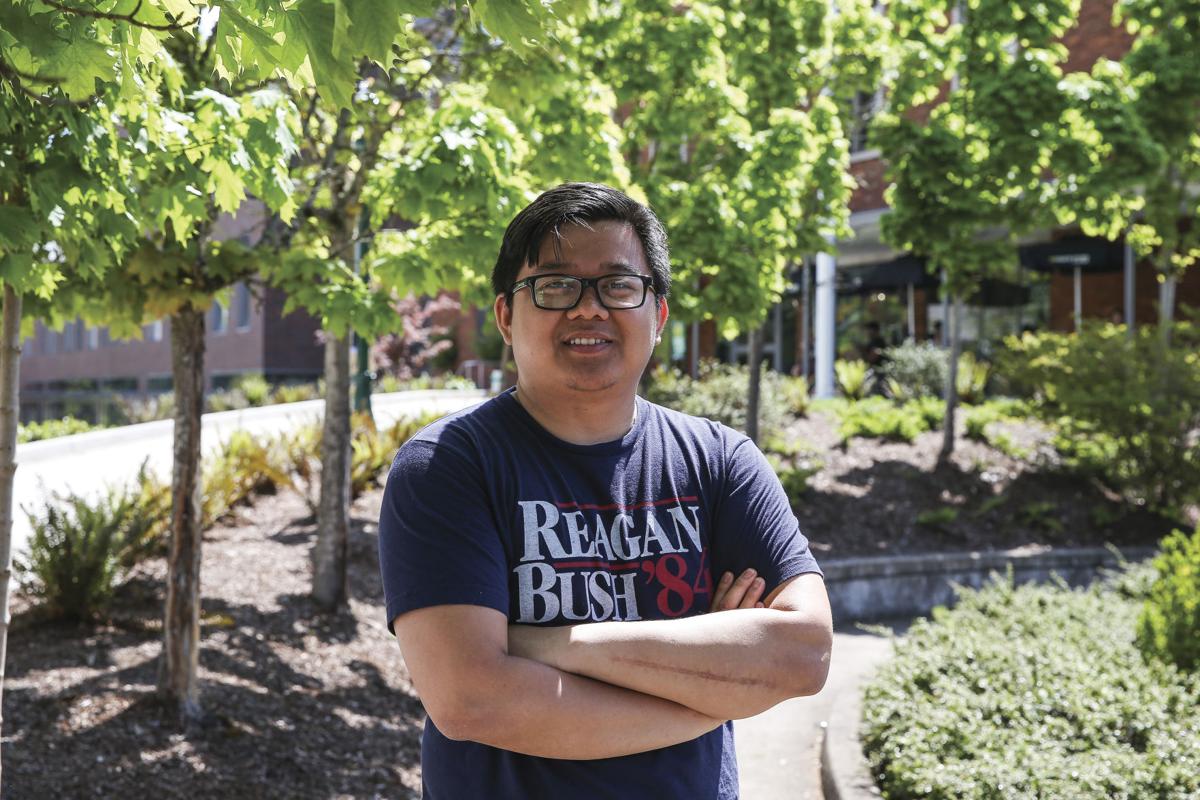 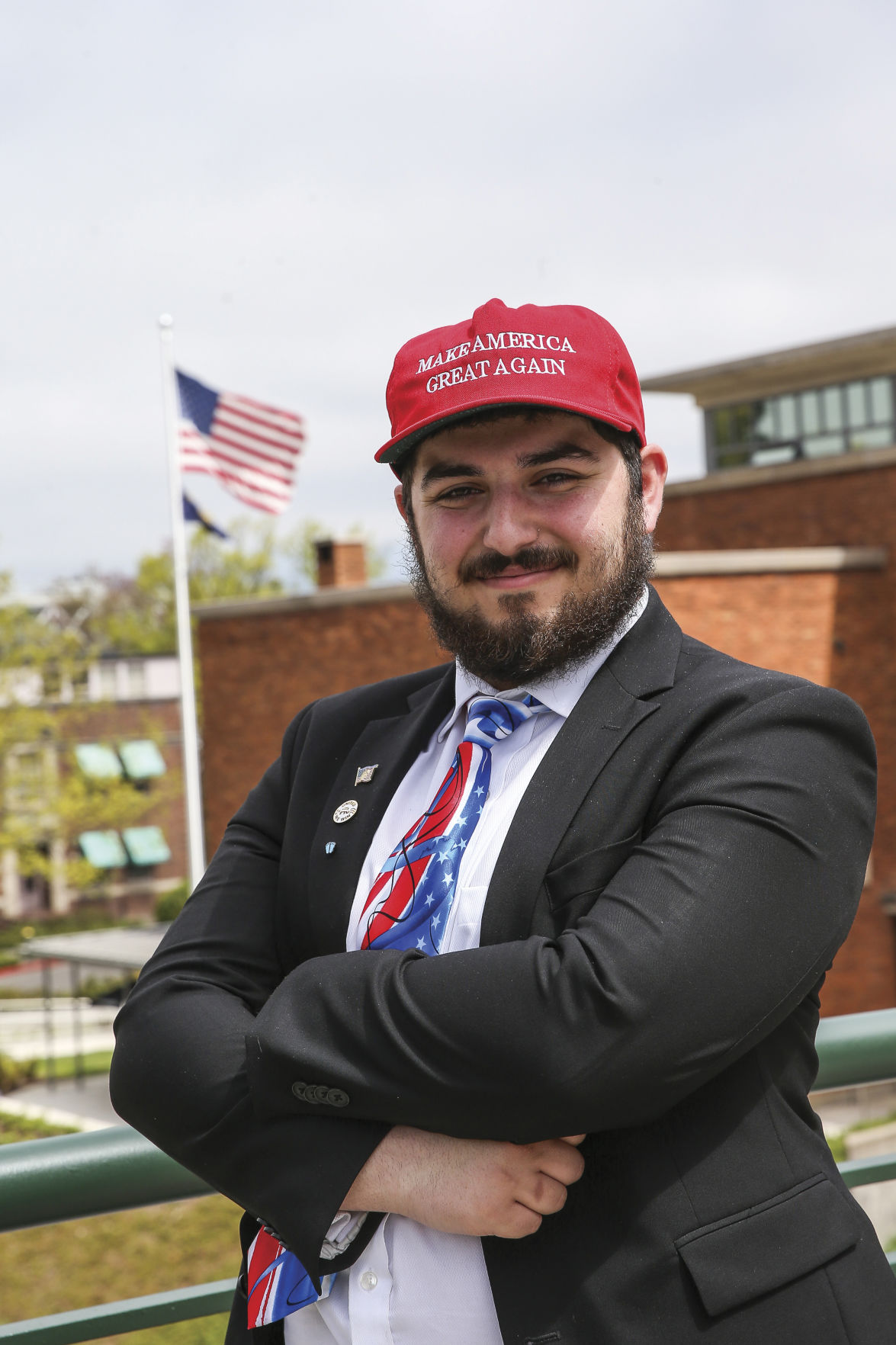 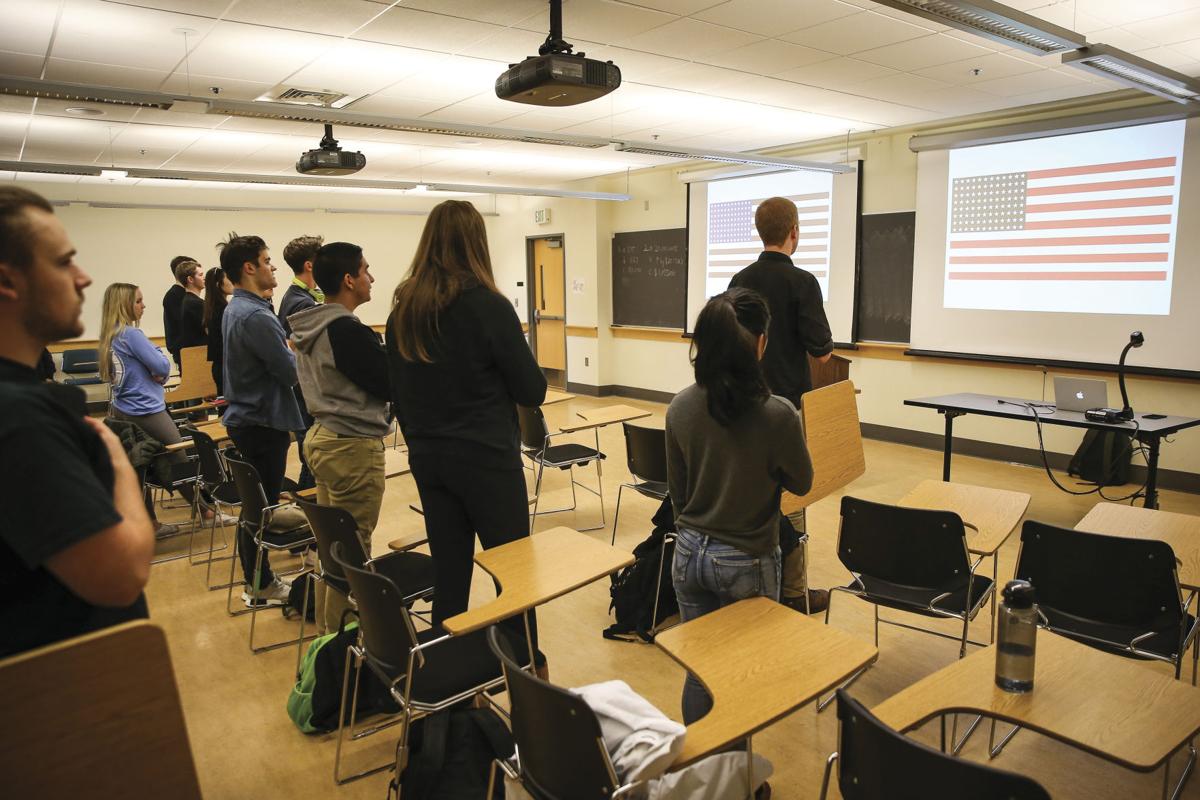 Students trickle into an empty classroom and shed their jackets, revealing their T-shirts. One shows a rainbow campaign logo stating “Make America great and Gay again,” and others walk in wearing bright red Make America Great Again hats. Many compliment their friends’ regalia as it is uncloaked, and a few mention how grateful they were to cross campus without being insulted or having a confrontation.

The event is the weekly meeting of the University of Oregon College Republicans, or CRs. Members say turnout for the meetings has grown from averaging 12 students in the past to around 30 after Donald Trump’s election. Members of the CRs say one of the hardest parts about being in the group is the negative connotation that surrounds the phrase “conservative on campus.” In some cases, it can be the difference between having friends or not.

“I would guess that maybe 20 to 30 percent of people on campus are Republicans,” said Trent Capurro, a sophomore political science major and the recruiting director for the College Republicans. “A lot of people feel that they do have to hide it to preserve friendships.”

While UO claims to fight for inclusivity and openness, many conservative and Republican students on campus say they feel their political views are stifled. They are a political minority in many classrooms throughout campus, and it’s not unusual for them to hear comments and threats from other students when they’re wearing something that reflects their conservative viewpoints.

The College Republicans’ table sits outside the EMU twice a week, and club members staffing the booth say they frequently experience verbal harassment in an atmosphere that makes them feel unwelcome.

Conservative students say they are not just harassed, they also say they are misunderstood. Many, for instance, did not support Donald Trump and backed other Republican presidential candidates. What’s more, they say they are frequently labeled as white supremacists and fascists, even though the club includes students of color, international students and members of the LGBTQIA+ community.

According to a four-year study from the UO Office of Institutional Research, 81.3 percent of conservative students on campus feel valued as an individual. In the same study, however, only 44.5 percent of polled conservative students feel their political beliefs are respected on campus, making 2016 the lowest percentage in the four-year span. In comparison, 92.8 percent of liberals polled feel that their beliefs are respected on campus.

“Do I feel like I have free speech? Yes,” said Justin Myhre, a junior journalism major and the chairman for the College Republicans. “Do I feel like they want to take it away from me? Sometimes.”

College Republicans face positive reactions too. Some students give a thumbs up or state their approval with a “keep doing what you’re doing.” As their tabling sessions reveal, Republicans on campus — when not facing harassment — are often met with incredulity, further driving the club’s mission to open themselves to the public and rebrand themselves in the eyes of the student body.

“I met a guy today who came by and was like, ‘Wow, you guys are actually out here? You have balls.’ Why note that? This is a diverse campus, right? We are all treated equally, why is it so strange that I’m out here?” Myhre said.

Myhre explained that while constellating under the banner of “Republican,” the club’s diversity of experiences and cultures helps provide knowledge and an optimistic future.

“There’s LGBT members, there’s people of color, international students — I love that,” Myhre told the Emerald in February. “That’s where all the knowledge is. They help us flourish. Without them, we wouldn’t be a club. We’d just be a bunch of white people, and that’s not the face that I want for the Republican Party in the future.”

Nationally, the College Republicans are “the nation’s oldest, largest and most active youth political organization,” according to their website. The organization was founded in 1892 and there are currently 250,000 members in over 1,800 chapters nationally.

While Capurro agrees with many of the Republican Party’s platform, he also agrees with Democrats on some issues, such as marriage equality and capital punishment. Many of the group members hold diverse viewpoints and struggle with the idea that there’s one set list of stereotyped Republican values.

One thing that unites the group is an agreement that they want a lower tuition and a more promising job market after graduation.

For many Republicans, Trump has been a powerful figure for self-expression and has emboldened them to speak their mind on campus.

“I think he has done a great deal of encouraging us to not hide our beliefs,” Capurro said. “A lot of people are coming to our organization because they no longer feel afraid to show their beliefs.”

Even though this openness has led to more confrontations and stereotypes, Khang Ngo, a member of the College Republicans and an international student from Vietnam, explained that the strife has caused him to better understand his Republican beliefs because he frequently has to support them with facts.

“I actually have to do the research and say ‘Here’s why I think it’s true.’ And it’s helping me to be more critical about things,” Ngo said.

But not all in the group were on board with Trump’s campaign or even with his current actions. Several members volunteered with other campaigns during the election, and at meetings members often question the actions of the president; however, members still said they had more opportunity with the election of Trump than if a Democrat had been elected.

“Not all of us were for Trump, but at the end of the day, we all probably voted for him, or at least most of us,” Myhre said.

Regardless of their support, Trump’s brand affects how the group is seen on campus. Capurro tables for the group outside of the EMU on Wednesdays and Thursdays, fully clad in his Trump regalia. He also keeps a list of the types of harassment he receives.

“People have said to us out of nowhere, without even asking our opinions … to drop dead,” Capurro said.

Capurro is Middle-Eastern but is regularly labeled as a white supremacist. Ngo sees similar treatment, even though he’s an immigrant from Vietnam.

“They’re assuming that because I’m a minority, I have to think in a certain way, which is not true,” Ngo said. “It’s probably the most racist thing to assume that just because you’re a minority you have to vote for a Democrat.”

According to the College Republican website, participating in activism is a doorway for students to become more involved with the Republican Party. Members choose a topic each term and participate in volunteer service. Last term their focus was with Food for Lane County, and this term the group is assisting veterans’ programs around Eugene.

With their growing numbers, the College Republicans are trying to find more representation and combat stereotypes. There is talk of putting forth a conservative-oriented ASUO slate next year to better represent their organization in a student government that Ngo has described as “leftist.”

Ngo said that after graduation he will stay in Oregon, unlike many Republicans, who leave for more conservative areas.

“I actually want to stay in Oregon and see this state turn red again,” Ngo said. “People call me a fool for saying that, but Generation Z is projected to be the most conservative generation since World War II, so I have hope for the future.”

This piece has been updated to reflect the number of College Republican chapters and members.