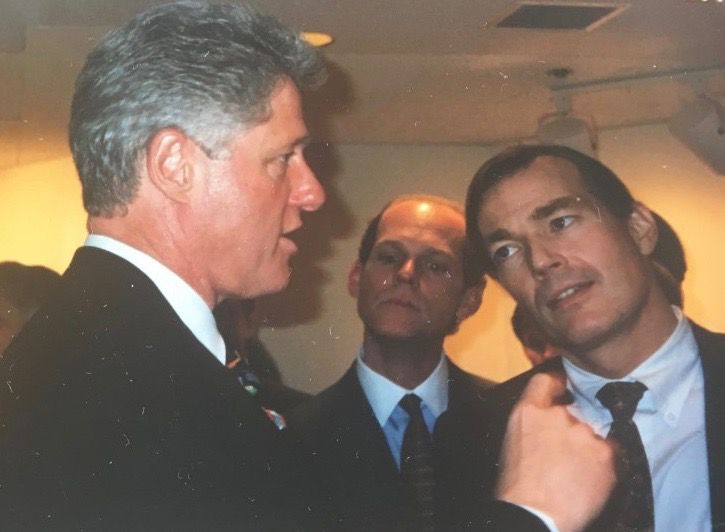 Drex Heikes '75 with President Clinton at a Washington D.C. news bureau reception in 1995. 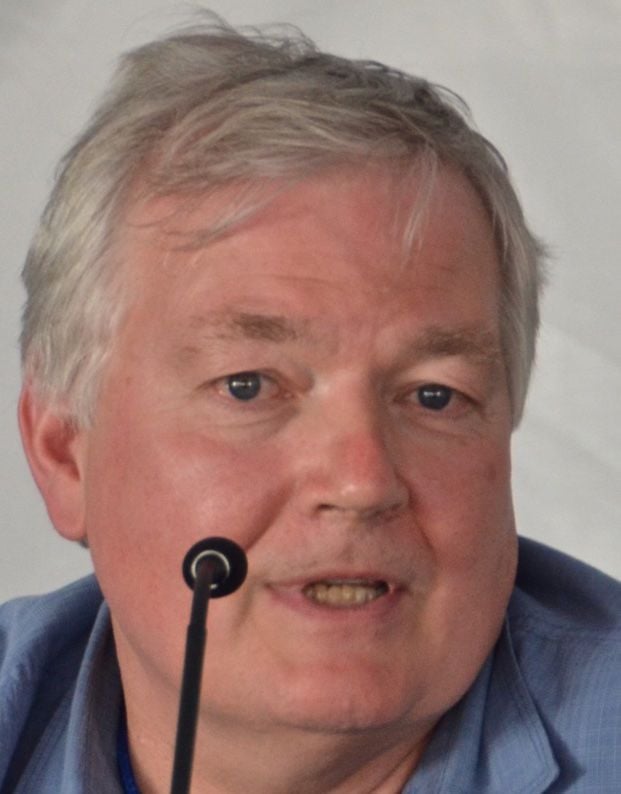 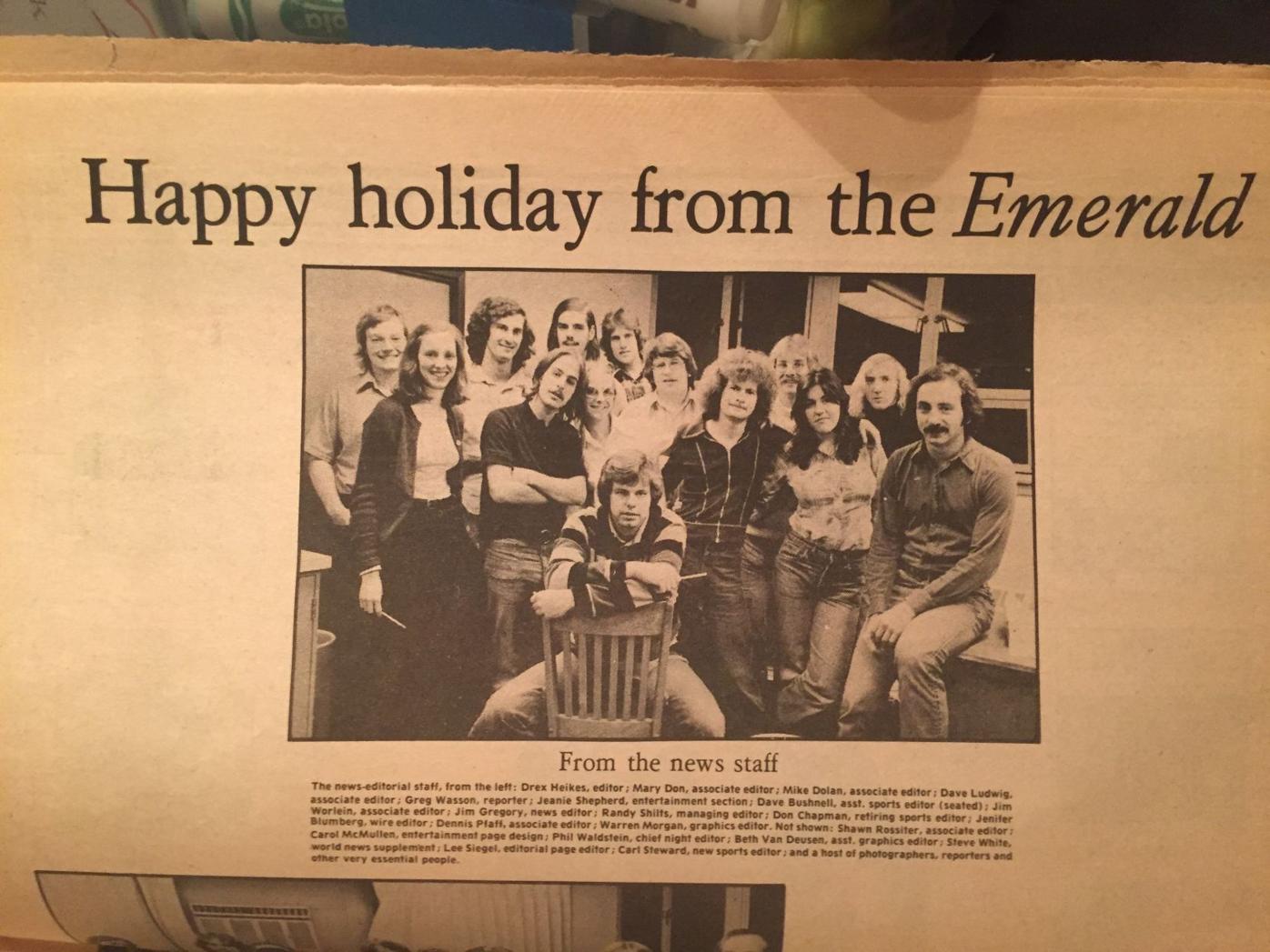 What did you major/minor in at the University of Oregon? How would you describe your time at UO and when did you graduate?

I majored in journalism with a minor in history. I graduated in 1975, which put me there during the Vietnam War years. Campus was a wild place then, full of political activists and strange characters. Classrooms were refuge from the mayhem. My freshman dorm had a mix of serious students, football players and druggies. (I remember playing softball in an open field outside the dorm when a couple of guys from my floor showed up on LSD. One who couldn’t walk a straight line hit the ball over the horizon.) The Emerald became my home, the one place on campus I felt kinship with everyone. I spent more time at the Emerald as an upperclassman than I did sleeping and going to class.

Describe your career path, so far. Where are you working now and what is your title?

I’m semi-retired from a career that took me to jobs in New York, Alaska, Los Angeles, Washington D.C., Las Vegas. I spent 21 years at the Los Angeles Times—in two separate stints at the paper. I quit working just last month but am doing some writing for the Times and may yet return to the newspaper.  I started as a reporter and worked my way into editing after a decade or so-from assistant city editor to metro editor to running newspapers in various places. I shared a Pulitzer Prize gold medal for Public Service at the Las Vegas Sun in 2009.

How do you think your time at the Daily Emerald prepared you for the job you have now?

The Emerald taught me nearly everything about the realities of reporting and writing in this industry. The J-School did an excellent job of teaching grammar, press law, editing and so on. But nothing compared to actually doing the work. I spent a year at the Emerald as a reporter, a year as the “news editor” (city editor) and a year as editor.

Describe your fondest memory relating to your time at the Daily Emerald.

A Friday afternoon in the spring of 1974 when former U.S. Sen. Wayne Morse came to my office and talked to me and editorial page editor Lee Siegal for an hour as part of our editorial endorsement process. Morse was a god on campus as he was one of just two senators who had voted against the Gulf of Tonkin Resolution, which, based on a trumped up attack on the U.S. Navy, sent the U.S. into the war in 1964. Morse knew the Emerald would endorse him. Who else? But he took time to come to campus to talk to a couple of young journalists--as if we mattered. The newsroom was vacant, lights out. We sat in my editor’s office, a fan turning slowly. I can still hear that fan, see Morse’s tweedy jacket and blue oxford shirt in the soft light, hear his gravelly voice.

Second profound memory was when three dozen Arab-American protestors stormed the Emerald and surrounded me in the middle of the newsroom, screaming, cursing and threatening me for running Pat Oliphant’s editorial cartoons depicting Arabs in unflattering ways—all related to oil prices and OPEC, which were big issues. A group of the activists had come to the office the day before to insist that we stop running the cartoons. I politely explained press freedom and the role of caricature in cartoons. They left unhappy. We were not scheduled to run another Oliphant for two days but after the encounter, I ordered one into the paper the next day.  Hence our offices were stormed. Aside from a couple of dark moments as an investigative reporter in New York years later, it was the most frightened I have been as a journalist. As I recall, I was bailed out by Emerald staff, which surrounded the group surrounding me and calmed things from the outside in. The head of the group left yelling that I was a fool, which I found offensive. I consider myself more idiot than fool.

Tell us about a time you managed a project at the Emerald. What was the process and the outcome?

The mid 1970s marked the start of the state cuts in higher education funding. The campus was starting to feel it. We sent a reporter into every last department on campus to write about the effects. I think it ran 27 parts (good god). The response from students and faculty was overwhelming. As I wrapped up my tenure as editor, I got a note from the dean of the honors college saying that he thought I was the finest editor he had ever seen at the Emerald. He was wrong, of course, by a wide margin. But I kept that letter.

How do you stay in touch with the team you worked with at the Emerald? Is there anyone you’d like to reconnect with?

My two lifelong friends came from the Emerald, as did a half dozen other great friends I reconnected with later. Those two original friends and I worked together at newspapers afterward—one in New York, the other in Anchorage. I’ve been on countless fishing and sports adventures with them. One is godfather of my daughter. The other is considered the third brother in my family.

Who I’d like to reconnect with? The answer isn’t what you think. It's Randy Shilts, my managing editor. He became the star of the class, a brilliant man beloved by everyone at the newspaper. Randy moved on to the San Francisco Chronicle and wrote two definitive books about the AIDS epidemic as it tore through the nation in the 1980s. Randy was a great friend—who every heterosexual staff member envied because he could bring roses to all the women on staff without a whiff of awkwardness. Randy died in 1994. Our staff tries to keep his memory alive.

If you had the opportunity to speak to current student journalists at the Emerald what would you say to them?

Never forget that journalism is the thing. Delivery mechanisms and form have greatly expanded and improved the way people get their information today. You need to learn those skills. But start with learning the craft—deeply. Love it. Nurture it.

The second thing would be: Don’t back down. Don’t ever back down to bullies who try to stifle a free press. Your job—your Constitutional duty—is to fight back.

The year I ran the Emerald year is one of my three most vivid memories in a 44-year career. We worked our butts off. We loved each other.  (The other two are going to New York after 9-11 to run the LA Times coverage of the attacks and the Pulitzer.)

My point is—the Emerald is a treasure. It is a unique and special thing. Savor every minute.